The Story Behind the Green New Deal’s Meteoric Rise 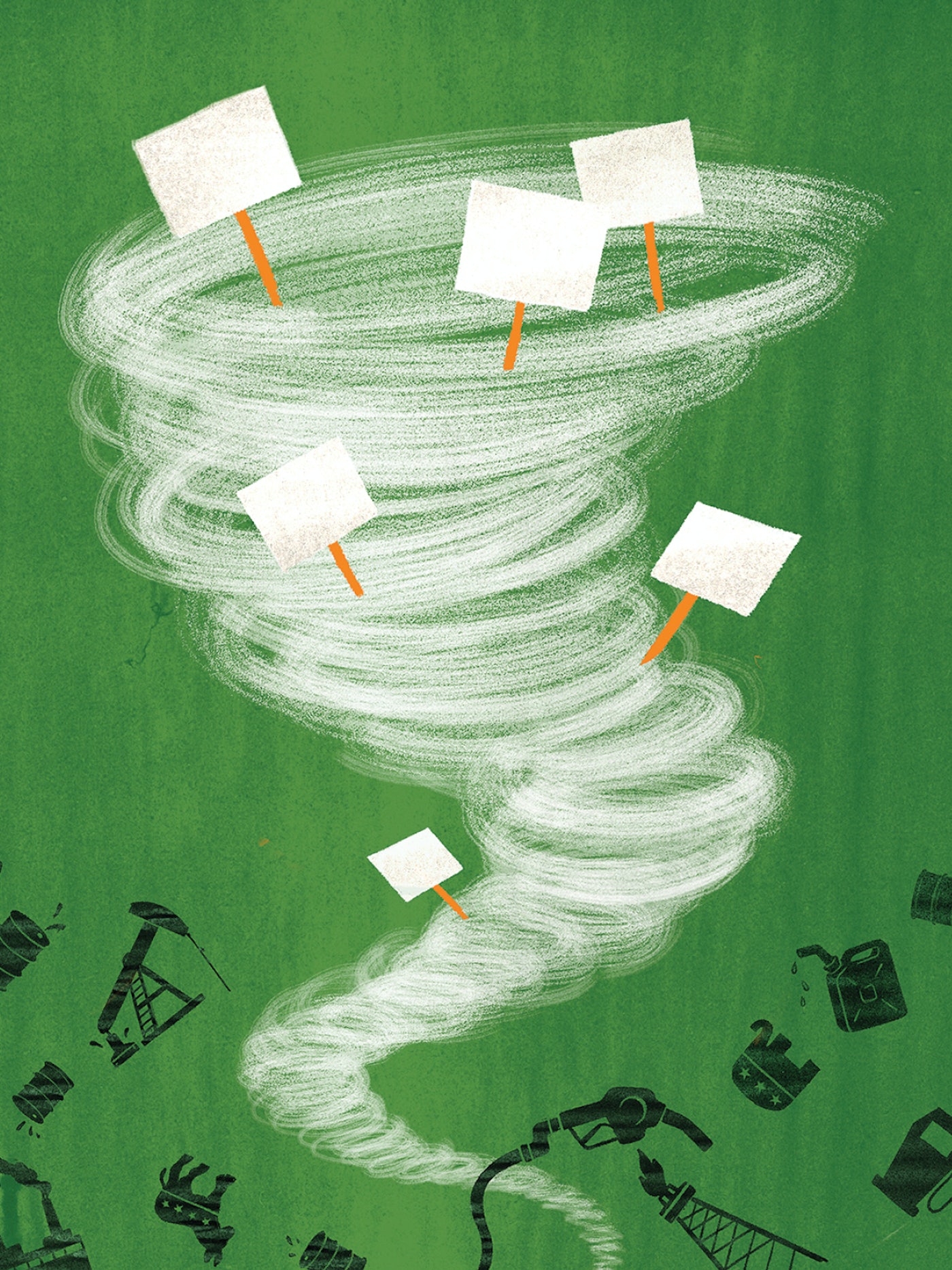 On November 13, 2018, just days after Democrats reclaimed the House of Representatives, dozens of young activists filed silently into Representative Nancy Pelosi’s office on Capitol Hill. Some sat down along the walls of the office, unfurling banners and forming a circle. Others stood in the center and told their stories. A teenage woman from Northern California began, “There were fires at my school. There was ash falling from the sky for a week.” She and her companions in the Cannon Office Building that day carried manila envelopes containing pictures of the people and places in their lives that climate change would destroy—or already had. On one side of the envelopes were the words “Dear Democrats”; on the other, “What Is Your Plan?” After some time, they began to sing—the protest songs of another generation, like “Which Side Are You On?,” and new ones they’d written themselves, about waters rising up and people rising, too. Their voices echoed down the marble halls.

Within weeks, their ambitious demand for a “Green New Deal” to decarbonize the U.S. economy by 2030 and provide a green job to anyone who wants one was on the lips of every congressional staffer, cable news reporter, and progressive candidate for president in the country. Reporting for Vox in late 2018, veteran environmental writer David Roberts described the astonishment of longtime climate wonks and advocates at the sudden ubiquity of the Green New Deal, the sense among those involved that they had “caught a tiger by the tail.”

Achieving this sort of moment, in which the horizons of political possibility expand with an almost audible snap, is what every social movement hopes to accomplish. But only some do. Silicon Valley has been working for the military since the start. Why are tech workers only now forcing some firms to turn down DoD contracts? Jim Crow was the law of the land for 80 years, undergirding the architecture of social and political life in the American South. How did organizers with SNCC, SCLC, CORE, and others manage to topple it in less than a decade? How did ACT UP change the public perception of AIDS from a disease whose victims were scorned and blamed for their suffering to a public health crisis demanding federal intervention? And why, despite over a decade of increasingly deadly hurricanes, droughts, monsoons, and heat waves, has no movement arisen with sufficient power to topple the cabal of fossil fuel billionaires who are largely responsible for the climate crisis?

“The whirlwind” evokes something visceral about what it feels like to be involved in a wave of political upheaval. It disorients, defies gravity, upends things and leaves them in a new place.

Alexandria Ocasio-Cortez gets much of the credit for bringing the Green New Deal into the mainstream. She visited Pelosi’s office during the sit-in, and in the following weeks, her staff collaborated with Justice Democrats, the progressive electoral outfit started by veterans of the Bernie Sanders campaign, to draft a policy proposal for a GND. But the plan truly owes its swift rise to a grassroots climate organization called Sunrise Movement, launched a year and a half ago by twelve young organizers—refugees from more mainstream climate organizations like Sierra Club and 350.org, and veterans of fossil fuel divestment and anti-pipeline campaigns.

Unlike more traditional environmental groups—which have long pushed for incremental, market-based reforms to mitigate the crisis—Sunrise doesn’t intend to appeal to elite opinion or sway elite institutions. Defeating climate change, Sunrise’s leaders have come to believe, will require a massive reordering of the U.S. economy—away from free-market fundamentalism and toward something fairer and more democratic. If they succeed, they may not only dramatically shift the politics of climate change, but also provide a new model for grassroots organizing in America.

Sunrise began in late 2015, when Sara Blazevic and Varshini Prakash, who’d worked together in the fossil fuel divestment movement, gathered a small group of friends for meetings in Brooklyn and Philadelphia. Blazevic and Prakash hoped to capture some of the dynamism of the Sanders campaign and direct it toward environmental problems. Existing climate organizations, the young organizers agreed, had been caught flatfooted by the populist uprising within the Democratic Party. Quickly they decided to start something new.

Movements often begin this way—with just a few people gathered in kitchens, living rooms, and church basements. But those quotidian scenes are not what we see in the media. Reporters like to tell stories about social movements springing out of thin air when a political moment captures the public’s imagination, and organizers tend to perpetuate such narratives. In reality, though, activists can spend months establishing the DNA of an organization—its structure, theory of change, and core principles—before launching it.

Blazevic and a handful of Sunrise’s other leaders learned about that process at a training session run by Momentum, a “movement incubator” begun in 2014 by former union organizer Paul Engler and immigrants’ rights activist Carlos Saavedra. Momentum’s central insight—which Engler and Saavedra are quick to acknowledge is not uniquely theirs—is that there are two dominant traditions of organizing in the United States. Labor and community organizations are “structured.” Staffed by trained professionals who focus on organizing members, they aim to win incremental but tangible concessions from bosses, politicians, or landlords. Other movements are rooted in mass protest. Occupy Wall Street, Black Lives Matter, and, recently, the Google walkout emerged spontaneously (or seemingly so), when massive numbers of hitherto uninvolved people were inspired to participate in direct action.

These traditions have conflicted throughout history. Structured organizations don’t always know how to harness the power of mass protests when they break out, and participants in mass protest can be openly hostile to structure. (Occupy Wall Street, for example, famously resisted the influence of organized labor, despite unions’ eagerness to help.) But Engler and Saavedra reject this dichotomy as a false choice. The best movements, they teach their trainees, combine structure and dramatic protest. In their telling, the civil rights struggle owes its success as much to the attention-grabbing resistance tactics of Martin Luther King Jr. and the SCLC as to the disciplined organizing and leadership development techniques taught by Ella Baker.

Even early skeptics, like Saul Alinsky, who founded modern community organizing, and his protégé Nick von Hoffman, came to recognize the promise of that synthesis. In 1961, von Hoffman hosted an impromptu event for a group of Freedom Riders in Chicago. To his surprise, the talk attracted a huge crowd. That night, he called Alinsky in a frenzy. “We should toss out everything we are doing organizationally,” he told his mentor, “and work on the premise that this is the moment of the whirlwind, that we are no longer organizing but guiding a social movement.”

In my interviews with the leaders of the Sunrise Movement, von Hoffman’s term, “the whirlwind,” came up repeatedly, standing out from the more prosaic, sociological words the activists used to describe their goals. To them, the whirlwind evokes something essential and visceral about what it feels like to be involved in a wave of political upheaval. The whirlwind disorients, defies gravity, upends things and leaves them in a new place.

Blazevic told me that she and Sunrise’s founders began by looking at Birmingham, Alabama, in the spring of 1963. What would it take, she asked herself, to create a similar whirlwind moment around a wildfire or a hurricane?

They ultimately settled on a hybrid approach: Theatrical encounters with politicians and public figures would polarize the public and mobilize new members, while more traditional organizing would build up a network at the local level. For six months before the midterms, Sunrise ran “Sunrise Semester,” gathering dozens of young people in key House districts, where they lived in movement houses and underwent intense trainings, helping elect some Democrats and targeting others with civil disobedience tactics, often risking arrest.

The Pelosi sit-in was a culmination of these efforts, and a perfect demonstration of Sunrise’s hybrid model. The activists had built trust and ideological unity through structured campaign work; these slower and more invisible steps allowed them to stage a dramatic mass protest.

Sunrise isn’t the only group to borrow Momentum’s tactics in recent years. Cosecha, an immigrant rights group, and If Not Now, a group for young Jews critical of the Israeli occupation, have also drawn from Momentum’s teachings. But neither has captured the public imagination to quite the same degree. One possible reason is that Sunrise has perfected a flair for theatrics and storytelling. The sit-in at Nancy Pelosi’s office had a compelling protagonist (as Blazevic puts it, “the young person who’s in the fight of their fucking lives”) and a clear enemy—fossil fuel oligarchs and any member of Congress doing their bidding.

Sunrise’s leaders know there’s no way to achieve their goals without fundamentally shifting the political ground beneath their feet. Their acute appreciation for the enormity of the task frees them to be unapologetic and ambitious in a way other groups cannot. “Young people are the most politically liberated force in our country right now,” Becca Rast, a Sunrise board member, told me. “We have less to lose than any other generation, and everything to gain. We can be radical. We can be visionary.”

Sam Adler-Bell is a writer living in New York City.