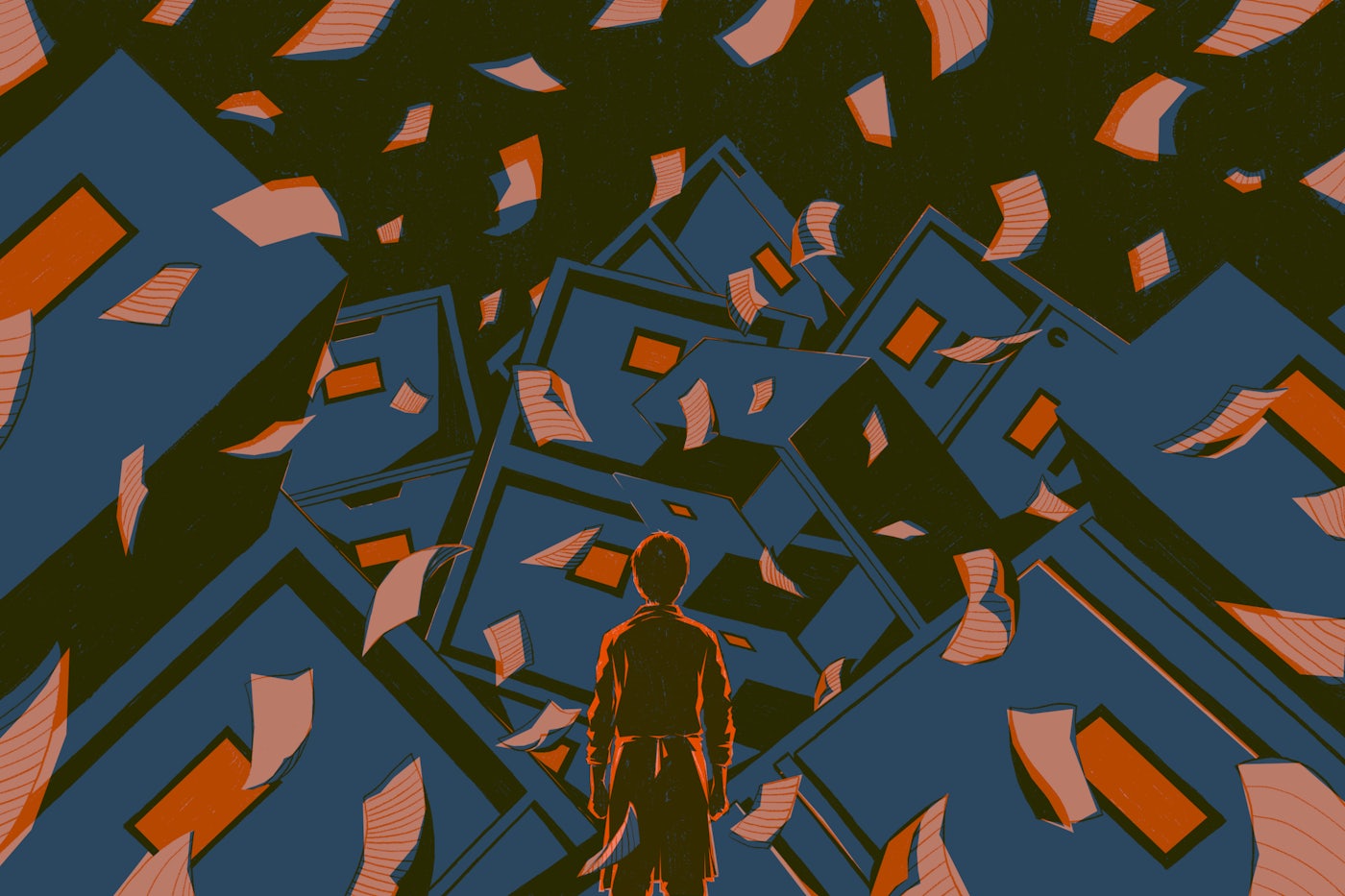 In April of last year, I sat down in front of my computer for a Zoom call with my supervisor at the small technology consulting firm where I was an analyst. It was supposed to be one of those routine check-ins, but I quickly realized something was off when the CEO appeared on my screen. The rest followed what by now has become a familiar script for millions of people: mentions of pandemic belt-tightening, layoffs, condolences, and notably, no severance. I was cast out into the growing army of the unemployed. When I later filed for unemployment insurance, I faced a thorny technical and bureaucratic minefield of malfunctioning computer systems, conflicting instructions, and uncertain benefits—along with the promise of future taxes I could hardly afford to pay.

I wasn’t alone. In New York last spring, more than 20 percent of private-sector jobs disappeared almost overnight, according to the state’s Department of Labor. Despite a modest rebound, as of the beginning of this year, New York’s unemployment rate was still hovering above 8 percent. Nationally, the unemployment rate peaked at 14.8 percent, a higher level than seen during the 2008 financial crisis. Black and Latinx workers saw higher unemployment rates than white workers; in April 2020, nearly 20 percent of Latina women were unemployed. As of November, about 37 percent of America’s unemployed had been out of work for 27 weeks or more. Four million people left the workforce altogether. And the firings continue: More than 800,000 people are filing new unemployment claims every week.

For those who must depend on U.I. benefits, navigating the system can be excruciating. It’s not uncommon to wait months for the first check or direct deposit. Automated systems deny benefits to deserving people, while finding a human bureaucrat to speak to can be a herculean challenge. “Funny how fast they deny a claim, but it takes months to be accepted,” a laid-off hotel worker told NBC News back in September. “It’s been a horrible struggle.”

The Covid-19 pandemic devastated the economy and induced a level of mass unemployment not seen since, well, the last major recession only 12 years earlier. But more than the 2008 financial crisis, the pandemic has laid bare how America’s rugged individualism, its tendency to pit each of us as a solo economic actor in competition with one another, makes for disastrous policy.

After this pandemic fades, its effects will linger for the people hardest hit in the last 12 months. Then another crisis will come. Our current unemployment system, an underfunded maze, is not built to sustain us in an era of mass long-term unemployment. If America is to do more than lurch from crisis to crisis in the coming years, Democratic politicians must look beyond a rudderless culture war with their Republican foes and finally improve Americans’ material lives. The inclusion of extended unemployment benefits in the proposed $1.9 trillion stimulus package is a start. But there’s room to do more, to rethink the system root and branch.

A New York State history of America’s unemployment system shows a struggle between federal and state authorities ever since U.I.’s introduction in 1935. The underlying problem was one that hampers attempts to establish ambitious social programs today: “It was feared that a federal system could be declared unconstitutional due to its possible encroachment on states’ rights.” A compromise was established: federal guidelines with state administration and determination of benefits. That has had consequences that still reverberate. Between the states and various U.S. territories, we now have 53 different patchwork technical systems, unnavigable bureaucracies, restrictive eligibility criteria, and most importantly, meager benefits.

“The more space we give states, unfortunately, the more there’s been a race to the bottom,” said Elaine Weiss, director of policy at the National Academy of Social Insurance, contrasting U.I. with Social Security, a popular federally administered program.

Last year, a Labor Department report found that U.I. trust funds, which receive money from payroll taxes, had been underfunded in about two dozen states. A refusal to update technology and hire more staff has left these programs struggling to process a record number of claims. The problem is one of ideology and budgetary priorities, reflecting a country in which military planners receive more than they ask for while governments are far more parsimonious toward valuable—and popular—social programs. With proposals like a $15 minimum wage and Medicare for All finding more support, there exists “a serious conflict between public opinion—what people want policy to be—and policymaking,” said Weiss. That call for more federal economic support may become impossible for some politicians to ignore, especially as programs like the Cares Act prove that simply giving people money can make a huge difference in alleviating poverty, means testing and targeting be damned. The success of that government stimulus has also led to calls from politicians like Ron Wyden and Rashida Tlaib for regular monthly payments throughout the crisis or even for a universal basic income.

As of now, a cruel, punitive attitude—along with a heaping of systemic racism—defines our approach to unemployment. As Weiss pointed out, policymakers stigmatize unemployment precisely in order to push through unpopular policies based on an ideology of austerity and deprivation. Under President Trump and a Mitch McConnell–led Congress, Republican leaders repeatedly tried to slash federal unemployment benefits, while their Democratic opponents lobbied for continuation of $600 weekly federal payments. Negotiations over a second stimulus package failed last year, in part, because of Republican disputes regarding how to phase out—not expand—federal unemployment benefits. Then–Treasury Secretary Steve Mnuchin led the charge, insisting that sending out onetime $600 checks would do more than regular payments. “It wouldn’t be fair to use taxpayer dollars to pay more people to sit home,” the millionaire film producer told Fox News.

Despite the tendency toward victim-blaming, over the last year, the way that experts and the public alike talk about unemployment has changed. On message boards like Reddit, the subforum known as r/Unemployment has become the depressing group therapy room of America’s particularly individualistic brand of capitalism. Besides providing a space for discussion and exchange of expertise, what it has revealed is the gaping hole at the heart of our social safety net. A typical story paints a grim picture: A single mother’s job wasn’t doable from home, so she was let go. She then spent five months applying for benefits, talking to unemployment officials, appealing decisions, even contacting Legal Aid and state representatives. Finally, after a pleading phone call, a decision came through, and she got her first payment. “It’s been a hell of a long 5 months,” she wrote. “There have been so many tears and so much loss.”

Sometimes, people are lucky only to encounter a buggy website based on antiquated technology. Last year, Weiss lost her job and had to contend with the U.I. system in Washington, D.C. She found herself facing a technical and bureaucratic disaster, all of it dependent on arcane software. “I had to literally install an old browser on my computer to access the system,” she said.

In my experience, the systems created to administer welfare programs seem deliberately engineered not to work, to obstruct and stymie those people seeking aid. “We’ve disinvested from the administration of [these programs],” said Melissa Boteach, vice president for income security and child care at the National Women’s Law Center.

The result has been much like the distribution of the Covid-19 vaccine, with people struggling to get the help they need from a dysfunctional system that doesn’t care about them. And like so much else in this pandemic, there are also clear racial inequities in the fallout: Last year, The Washington Post dubbed this recession “the most unequal in modern U.S. history,” citing its disproportionate effect on minority and low-wage workers. These inequities are also reflected in state policies. As economist Kathryn A. Edwards noted, “the states with more Black workers have less generous unemployment benefits.” In Mississippi, for example, weekly unemployment assistance is capped at $235. “So when we look at this picture on a national level,” Edwards noted, “Black workers are less financially supported in unemployment than white workers simply by virtue of where they live.”

In place of government assistance, a culture of mutual aid has developed. Just as with vaccine procurement, people share information, telling one another which websites to visit, which numbers to call, or how to find an actual person on the other end of a phone number. They log onto r/Unemployment or Facebook groups or other online forums, where they air their complaints and ask the essential questions about benefits and access that under-resourced state governments are incapable of addressing. And when, after weeks or months of struggles, someone finally manages to obtain that first payment, they go onto a message board to celebrate and pass on some best practices. “This advice may not help everyone,” wrote one person in New Jersey, reflecting on how unpredictable and variable the U.I. process is, “but I’m sure it could benefit someone.” They then offered almost 700 words of unprompted advice about dealing with New Jersey’s maddening U.I. system.

“People are almost reinventing what governments should do and should be, even in just the sharing of information, education, and outreach,” said Indivar Dutta-Gupta, a law professor at Georgetown who serves as co–executive director of the Center on Poverty and Inequality.

As inspiring as this ethic of mutual aid can be, it shouldn’t be like this. If you’ve read the tales of existential despair on r/Unemployment, you know this state of affairs calls for political outrage as much as it does for helping our neighbors. Weiss and I were lucky, both of us getting the benefits we needed in the end. Talk to anyone who’s unemployed, and you’re likely to hear stories of denied benefits, late checks, and struggling to pay for basics like food and rent. Despair is endemic. The urgency of the situation could not be clearer.

“I have never seen more consensus,” said Dutta-Gupta, “for strengthening the federal government’s role in unemployment assistance.” Unless you buy into an outdated, largely right-wing vision of federalism, there’s no reasonable argument against national U.I. “We’re a country, too, a national community,” he said. “We’re constantly subsidizing each other.”

Other policy experts I talked to agreed that now is the time to act, especially with a Democratic congressional majority. “We have this really rare and important window to do it differently,” said Boteach. We should expand U.I. and other programs of social insurance, she said, pointing out that it has been 50 years since President Richard Nixon vetoed universal childcare, another program that could have transformed economic life for millions.

“We have few moments to fix or transform our systems for unemployed workers,” said Dutta-Gupta. We may have failed in the past, he said, but “we do have a chance now.”

Jacob Silverman is a staff writer at The New Republic and the author of Terms of Service: Social Media and the Price of Constant Connection.