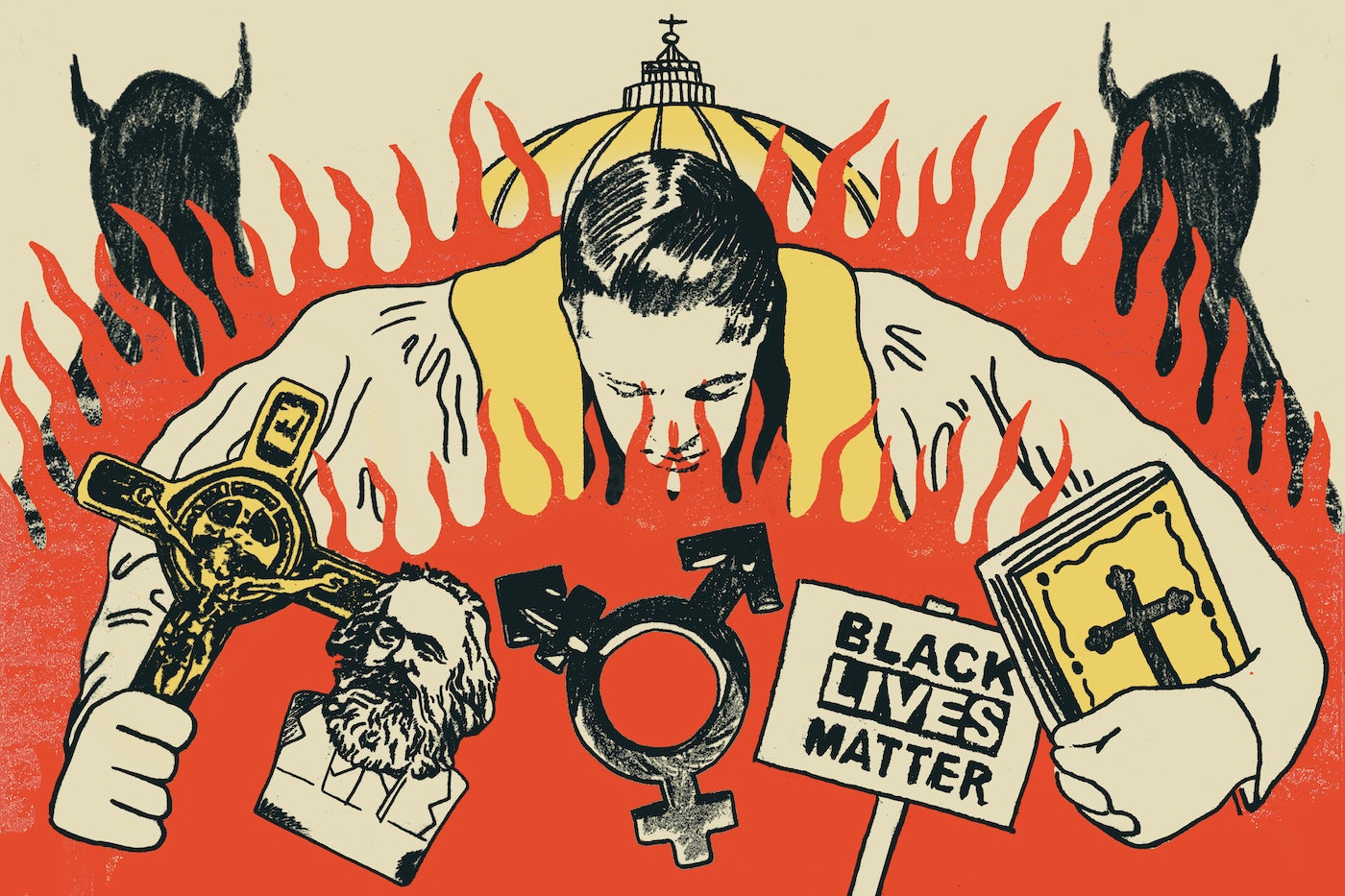 In Elysburg, Pennsylvania, there is a Vatican-trained exorcist and professed expert on spiritual warfare, who lectures and tweets about the “demonic” forces of our times. It might surprise you to learn what these latter-day Regan MacNeils bedeviling our safe suburban homes are: Black Lives Matter, Marxism, critical race theory, intersectionality, and wokeness. And this cleric is not the only exorcist very publicly conflating the Evil One with the left, real and imagined.

Last fall, a Portland archbishop led a procession into a public park, where he conducted a Latin exorcism to dispel the evil spirits left by racial justice activists. The very same day, a San Francisco archbishop performed a similar rite at the site of a felled statue of Father Junipero Serra, an eighteenth-century Spanish friar whose missionaries forced Indigenous people to convert to Christianity, whipping and torturing many to death. Flanked by rosary-praying nuns, priests, and laity, Archbishop Salvatore Cordileone asked God to “purify this place … purify the hearts of those who perpetrated this blasphemy.” He later called upon authorities to press felony and hate crime charges against the Native protesters who toppled the statue.

Many locals were outraged. Gregg Castro, an activist of the Salinan and Ohlone tribes, told the National Catholic Reporter, “Exorcisms are a throwback to the thinking of the 1700s, which justified what the Spaniards did to us. To them we are some kind of demonic spirits.” One individual suggested that exorcisms might be better suited at U.S. Immigration and Customs Enforcement facilities, where immigrants are kept in cages and women report being forcibly sterilized. A retired priest offered that more wisdom could be gained from listening to the people “for whom Serra is a stumbling block to the church’s credibility.”

But Archbishop Cordileone seems uninterested in defending the racially oppressed or critically examining the church’s history of white supremacy. Like the exorcists writing screeds against Black Lives Matter and the U.S. bishops preparing to formally declare President Joe Biden unfit for communion because of his support for abortion rights, Cordileone is a culture warrior. He has previously made headlines for demanding Catholic schoolteachers sign morality clauses and opposing pandemic-related worship restrictions, which he calls the work of “secular elites.”

It is tempting to view the weaponization of religious rites against one’s political enemies as a product of our hyperpoliticized times, wherein so many prominent officials and even corporations are compelled to wear their persuasions on their sleeve. But such a view obscures how thoroughly Catholic clerical power is tied up in the racist, misogynist politics of the contemporary right. For people like Cordileone, the capitulation to secular politics has become a means to preserve the perverse hierarchy from which priests have long derived their power. Understanding this hierarchy is key to combating the influence of the Catholic far right.

“Clericalism,” as some call the doom-laden cult surrounding priests, has become much talked-about in this era of rampant sexual abuse. Acclaimed Catholic author James Carroll argues it’s been “at the root of Roman Catholic dysfunction” since its origins in the late Roman empire. In The Truth at Heart of the Lie: How the Catholic Church Lost Its Soul, Carroll writes that the early church was fairly egalitarian, with believers breaking bread in each other’s homes and many recognizing women’s authority to preach the “good news.” It wasn’t until Emperor Constantine desired a more imperial religion in the fourth century that an all-male clergy was marked as the “chosen,” through whom believers were compelled to seek salvation. The religion shape-shifted from one based on hospitality and love of neighbor to one fixated on sex—something Carroll blames on the sexual neuroses of theologians like St. Augustine, in addition to the practical need to enforce celibacy. (If priests fathered children, their heirs would lay claim to the church’s wealth; and if they didn’t appear to transcend their flesh, they couldn’t as effectively wield power over the embodied masses.)

It’s no wonder to Carroll that torture, sexual abuse, and colonial violence long pervaded a world in which believers were taught God required their suffering and urged to submit to authorities or else face the fires of hell. But something radical happened in his lifetime: A reformer was elected pope. In 1962, Pope John XXIII convened Catholic hierarchy to “throw open the doors and windows,” and the ecumenical council now known as “Vatican II” ushered in a range of democratizing liturgical changes. The church replaced Latin with the vernacular of congregants and brought the altar down to the people’s level. It formally apologized for centuries of wrongdoing against Jews, which many viewed as laying the groundwork for the Holocaust, and even established a commission to revisit the prohibition of birth control, which promised to elevate women by recognizing the sacredness of sex apart from reproduction. Reflecting on this moment in history, which inspired him to enter the seminary and take his vows with the Paulist Fathers, Carroll writes, “Instead of trusting priests, we began to trust God.”

But he and other progressive Catholics didn’t stand long in the sun, as traditionalists found ways to preserve the old order. After Pope John’s death from stomach cancer in 1963, the birth control commission was disbanded; and after the council’s official conclusion in 1965, other social justice initiatives fell by the wayside. Over the next several decades, during which time a disenchanted Carroll left the priesthood, the church made opposition to abortion the primary marker of Catholic identity.

According to John Gehring, author of The Francis Effect and Catholic director at Faith in Public Life, this “single-issue Catholicism” became especially prominent in the United States, where Pope John Paul II appointed figures like Cardinal John O’Connor and the now-disgraced Cardinal Bernard Francis Law. Both “leaned into a style of culture-war Catholicism by publicly challenging pro-choice Catholic politicians and more broadly viewing progressive strains of Catholicism with suspicion or even contempt.” Gehring tells The New Republic that the 2020 presidential election marked unprecedented partisanship, with bishops and priests becoming “full-throated cheerleaders for Trump … using their Twitter pulpits to audition as Fox News pundits.” These pastors were perfectly willing to “ignore Trump’s racism and contempt for democratic norms” in exchange for his promise to appoint anti-abortion judges.

Gehring believes conservative Catholics’ view of the Black Lives Matter movement as extremist grows out of “a distorted worldview shaped by the far right,” as well as their unwillingness to examine white supremacy within the church—something other critics have linked to the paternalist culture described above. In Racial Justice and the Catholic Church, Father Bryan Massingale, who is a Black priest, chronicles U.S. bishops’ persistent condescension toward civil rights activists, as well as their stubborn framing of racism as a spiritual (individual) problem rather than a social one. The latter allows the church to continue centering whiteness in its aesthetics, music, and theology and avoid the kind of truth-telling needed for real healing and reparation. Truth-telling might involve leaders meaningfully reckoning with the church’s introduction of slavery into the U.S. and its history of segregating African Americans in parishes, schools, hospital, convents, and seminaries—atrocities discussed by other Black Catholic scholars like Shannen Dee Williams and Olga M. Segura.

In Birth of a Movement: Black Lives Matter and the Catholic Church, Segura notes the deference that bishops, fewer than 3 percent of whom are Black, pay to police in pastoral letters like “Open Wide Our Hearts,” which was issued in 2018. “We must reject harsh rhetoric that belittles or dehumanizes law enforcement personnel who labor to keep our communities safe,” the clerics urge, utterly dismissing people of color who report traumatic experiences with law enforcement. It surprises neither Segura nor Massingale that priests empathize with the police, given what Massingale calls the “normative whiteness” of the church. With this, Massingale nods toward the parallels between police and priest culture, about which Fr. Daniel P. Horan has more pointedly written: “In many ways, the criminal laws and institutional policies that maintain doctrines like qualified immunity [for abusive officers] provide something of a civil equivalent to the culture of clericalism in the church.” For Horan, men in blue and men in black are inextricably bound together by their each being above the law.

In view of this bond, it’s hard to read the actions of Cordileone and other self-styled demon-chasers as anything other than acts of power, intended to put progressive-minded laity back in their place. If these officials wish to exorcise the bad politics from their parishioners, they have their work cut out for them. Catholics are actually divided on Black Lives Matter, despite priests’ declaring activists “maggots and parasites” (one Indiana priest’s words). This may stun some men of the cloth, who have been taught to view themselves as moral superiors. Conservative clergy are certainly alarmed by Pope Francis, who, while not nearly as progressive as many on the left would like, is steadfastly laboring to shift power away from Rome and return the church’s focus to the vulnerable and dispossessed. Some, like Italian Archbishop Carlo Maria Viganò, have preposterously tried to implicate Pope Francis in the sexual abuse crisis in order to undermine his agenda.

These extremists do have the benefit of ready-made platforms, thanks to the rise of outlets that, in Gehring’s words, “operate more as propaganda mills for right-wing Catholicism than legitimate news sources.” Case in point: A handful of sites like the National Catholic Register published Viganò’s accusations against Pope Francis, despite their being unfounded. Kaya Oakes, author of The Nones Are Alright, adds that many conservative Catholic news outlets have deep-pocketed donors, which means sensationalistic voices get amplified, while those defending the poor and marginalized are drowned out. “There’s no equivalent to the Koch brothers on the Catholic left,” she tells The New Republic. But, she says, there is something that sensationalists are losing, and that is congregants. “People are leaving the church in droves, particularly Gen X, Millennial, and Gen Z Catholics who disagree with these conservative stances.”

Some may reject religion altogether. Others may simply find God in other spaces, where, in Segura’s words, referring to Black Lives Matter, people understand “what it truly means to fight for the most marginalized groups in our society, what it means to truly care about human life.” Carroll urges that Catholics shouldn’t be afraid to abstain from formal rituals, as the first and most enduring church was always the “people of God.” He himself has not gone to mass in several years, all the while declaring his unwavering love of Jesus. “I refuse to let a pervert priest or complicit bishop rip my faith from me.” Others report going to church at night to be with God when no one else is around.

Some conservatives may rejoice in a more homogenous faith community, reasoning that progressives weren’t “real” Catholics anyway. But they will still have to contend with their own dwindling moral relevance at a time when many believers are ready and willing to build a more just world. Further weaponization of rites and sacraments will gain headlines, but as these holy men drink ever deeper draughts from the Gospel of Owning the Libs, they’ll continue to shed congregants and grow more isolated. It would be well for these exorcists to examine their own demons before they cause even further harm to the church.

Audrey Clare Farley is the author of the forthcoming book The Unfit Heiress: The Tragic Life and Scandalous Sterilization of Ann Cooper Hewitt.