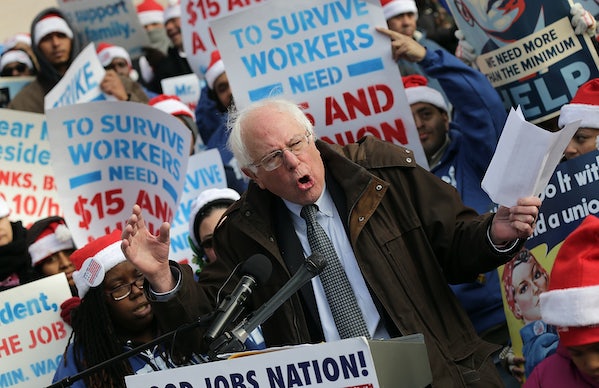 Bernie Sanders is about to give his "chill out, I'm not a Soviet" speech at Georgetown.

It was obvious from the moment Sanders decided to refer to himself as a democratic socialist that he would eventually have to explain what that means to a country still inexplicably scarred by the Cold War. Today Sanders is stepping up at Georgetown University to distinguish democratic socialism from the creepy totalitarian nightmares of the Soviet era, and to take a stand for egalitarianism, empowering the working class, and defending programs that protect Americans from the travails of the market.

Democratic socialism means that we must create an economy that works for all, not just the very wealthy.

Democratic socialism means that we must reform a political system in America today which is not only grossly unfair but, in many respects, corrupt.

The speech covers the history of American welfare policy, the difference between socialism and democratic socialism, and the kinds of programs Sanders envisions for the future. Perhaps most inspiring to those a bit to the left of the Democratic mainstream is Sanders’s unabashedly positive use of the s-word: if Bernie’s campaign has no other lasting legacy but this, it will still have made major inroads for the open proposal of democratic socialism as a real alternative to our current system.