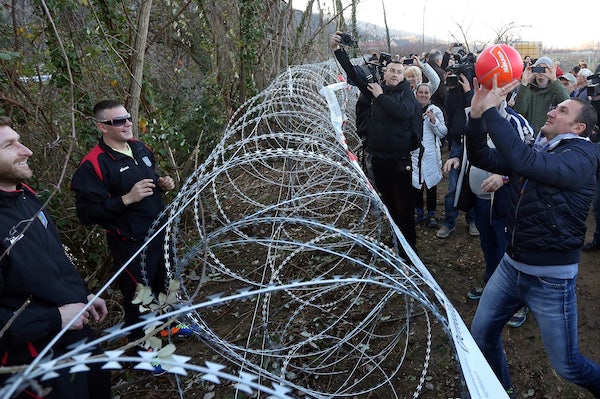 Slovenians are protesting a razor wire fence built to block the path of migrants by using it as a volleyball net.

The Slovenian government started building the fence along the Croatian border in November amidst concerns about migrants from the Middle East coming to Europe. In the last few weeks the fence has attracted multiple forms of protest from both sides of the border. In the Croatian towns Rupa and Pasjak, residents tried to dismantle it, and last week the Croatian poet Nenad Popovic posed next to the fence with his hands covered in red paint. On December 13, a journalist posted a picture of a deer killed in the razor wire in Belakrajina.

But in the last few days protesters have also tried to draw attention to the severity of the fence by performing joyful activities near it. Near the Lucija Brezovica border crossing on Saturday, locals hung Christmas tree ornaments from its barbs, and at the Dragonja Kastel crossing, members of the Slovenian and Croatian volleyball teams staged a friendly game, attended by large crowds with smartphones.