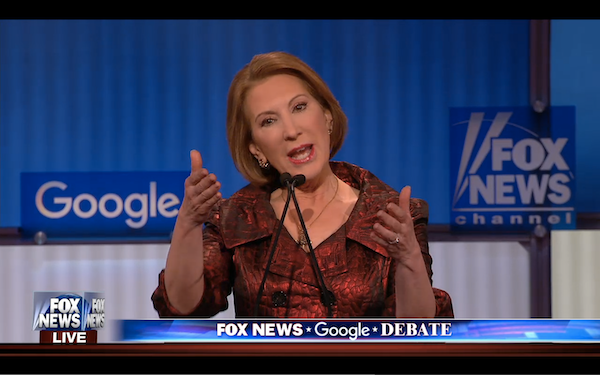 Every also-ran in the Republican undercard debate is throwing a Hail Mary.

Carly Fiorina, Mike Huckabee, Rick Santorum and Jim Gilmore—making his first debate outing—are all probably going to be out of the race after the Iowa Caucous on Monday. But maybe, they think, if they make a big enough splash tonight, that doesn’t have to be the case.

Each candidate’s Hail Mary has its own style, but they generally take two forms: hard line statements designed to appeal to their niche supporters, and allusions to Trump, either to appeal to his supporters or to mark themselves against him. Huckabee started the night by desperately appealing to Evangelical vote that supported him in the 2008 Caucus. “Let’s get rid of abortion once and for all by applying the 5th and 14th amendments to every person from conception.” This is nothing new if you’ve paid attention to Huckabee’s views, but no one has approached abortion so directly in a debate before (even Fiorina’s anti-abortion views have been expressed via anti-Planned Parenthood speeches).

Santorum, who will be joining Trump’s veteran’s event after the debate, used a move straight out of Trump’s playbook: ranting about how terrible the media is.

Fiorina—whose giant Telenovela villain crucifix might be interpreted as a literal Hail Mary—hated on the media as well, and also dredged up #Benghazi.

Gilmore pulled a fast one and informed the audience that he isn’t here for Iowa—he’s really campaigning for New Hampshire.