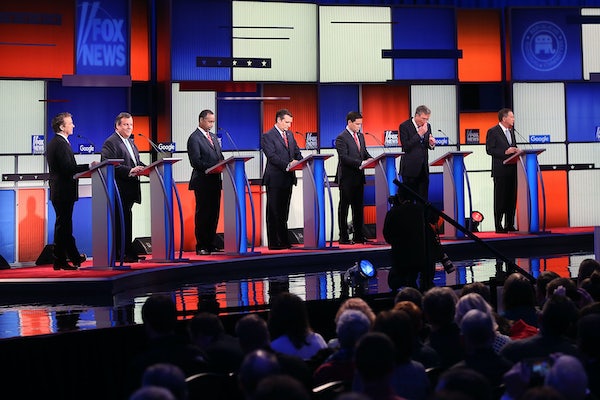 Is this a GOP debate or a public group therapy session for politicians with dad issues?

How is your relationship with your dad? Good? Bad? Maybe it’s complicated. Was he overbearing, absent, did he expect too much, or did he start some kind of libertarian political movement you were unable to sustain? We’ve all been there, and tonight the GOP candidates went there, with several game-opening dad mentions to get the night going.

Ted Cruz thanked Iowans for allowing his father, a pastor, to preach in their churches; Iowa was not immediately available to confirm whether Cruz was welcome or not.

Jeb Bush mused on his father, brother, mother, and his path to the presidential candidacy, which is (puzzlingly) in equal parts dynastic inevitability and total failure. But he did cop to being an establishment candidate, based in large part on his dad, who he considers “the greatest man in the world.”

Rand Paul then reflected on his dad, whose positions he insists he embraces, and perhaps he even thought in that instant about his father’s embrace, but the moment quickly passed, and the debate ground on.