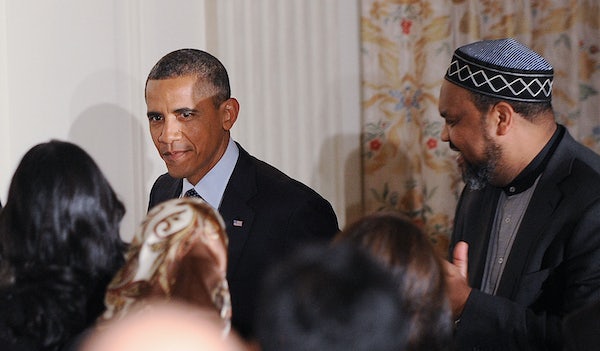 Obama to Muslims: “You’re not Muslim or American, you’re Muslim and American.”

His appearance on Wednesday at the Islamic Society of Baltimore (strangely enough, the same mosque that Serial’s Adnan Syed used to attend) was an important and symbolic first for his presidency. The visit was met with an expected amount of controversy on the right, but Obama forged ahead with a case for American inclusivity. He promised to amplify the “multiplicity of Muslim voices that promote peace.”

Obama reminded everyone that Muslims have been contributing to American society for quite some time now. To those Republicans who have been running campaigns that capitalize on Islamophobia, Obama deplored the “inexcusable political rhetoric that has no place in our country.” He also joked, “By the way, Thomas Jefferson’s opponents tried to stir things up by suggesting he was a Muslim.”

The president even had a few choice words for Hollywood: “Our television shows should have some Muslim characters that are unrelated to national security. It’s not that hard to do.”

The weightiest parts of the speech were devoted to national security. The president reiterated his position that “groups like [ISIS] are desperate for legitimacy,” and that he refuses to grant them that by identifying them as affiliated with Islam.