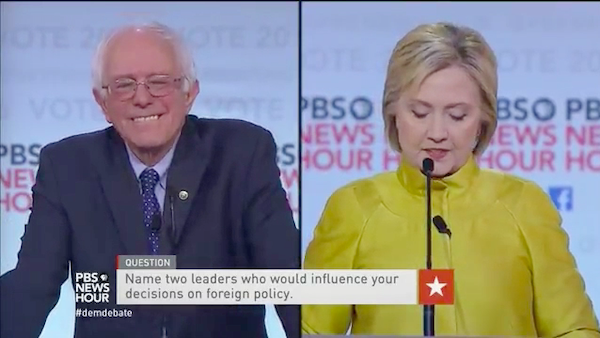 Bernie killed it on the final debate question and Hillary... didn’t.

PBS elevated this question from a random Facebook person: “Can you name two leaders, one American and one foreign, who would influence your policy decisions?” Sanders could have trolled all of conservative media by answering “Neville Chamberlain.” He didn’t do that, but he also did more than name uncontroversial dead presidents. His answer was inspiring, a case against defeatism.

Franklin Delano Roosevelt’s famous line—“The only thing we have to fear is fear itself”—was “a profound statement that gave the American people the courage to believe that, yes, we could get out of that terrible Depression. And then what he did is redefine the role of government.” Herbert Hoover had argued helping needy people was not the role of the government. “And what FDR said was, ‘Yeah, it is.’” Sanders then shifted to a pitch for his candidacy, and a defense against Clinton’s criticism that his policies are not achievable: “That’s what I see our campaign is about, right now, in this particular moment of serious crisis, saying to the American people, ‘Dont give up on the political process.  ... If we engage and get involved, yeah, we can have health care for all people,” and free college tuition, etc. Then he cited Winston Churchill, though “[his] politics were not my politics,” for rallying the British people.

His answer ended on a pleasant, patriotic note, just as the debate was almost over. Hillary began her response by clearing her throat, which was not a good sign. She said FDR was great, but she also liked Nelson Mandela “for his generosity of heart, for his understanding of the need for reconciliation.” That’s it. Then she started attacking Sanders for criticizing President Obama’s leadership. Clinton did get applause when she said Obama “doesn’t get the credit he deserves.” But it was still tone-deaf, taking a moment that was about America being awesome and turning it into a fight over cable news hits. And it underscored the memes of the campaign—that Sanders has inspiring ideas, and that Clinton knows how to score points.