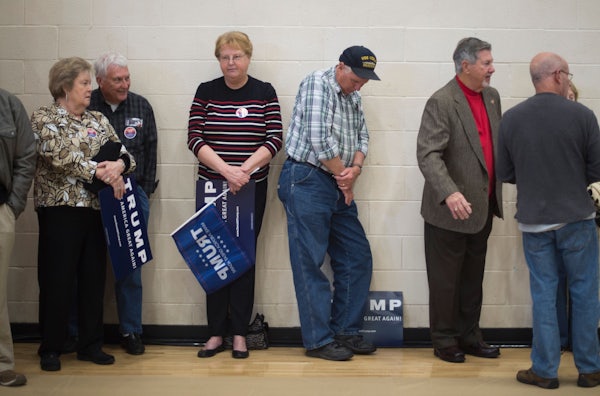 Donald Trump’s juggernaut campaign for president—he reached a new high today in Quinnipiac’s latest national poll—has been very valuable in revealing the disconnect between the base and the issues that nominally drive the party. Turns out that there are very few people outside The Wall Street Journal editorial board and Marco Rubio’s patrons who care deeply about eliminating the capital gains tax! Who knew?

The Times shows that it goes deeper than that, reporting that even Trump’s claim that George W. Bush “lied” in the run-up to the Iraq War—dismissed as liberal propaganda by the GOP’s hawkish foreign policy wing—isn’t hurting him with South Carolina’s military-friendly voters.

At a rally Tuesday in North Augusta, S.C., across the Savannah River from Georgia, Mr. Trump called to the stage a man from the audience who had quieted a protester in the crowd.

“I did two tours in Iraq,” the man said, as the crowd erupted in cheers and chants. “If it weren’t for Mr. Trump right here, I don’t think any of us would have the voice that we have.”

The issues that are driving Trump’s campaign are immigration and trade. These are also two issues where Republican elites and their corporate backers most clearly diverge with base voters. It’s almost as if they don’t have very much in common.