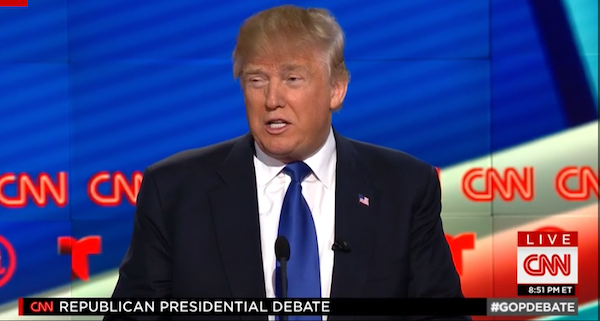 This is the moment Donald Trump tried to sweep months of racism under the rug.

At the tenth Republican debate, Telemundo moderator Maria Celeste Arraras asked Trump about a recent poll that showed that most Hispanics view him unfavorably. The hotelier responded that most polls have shown him leading among Hispanic voters. “I will do really well with Hispanics,” Trump said. “I will do better than anyone on this stage. We are building a much bigger, much stronger Republican Party.”

What Trump is forgetting is that he spent months launching rabidly xenophobic attacks against Mexican immigrants, calling them drug smugglers, rapists, and murderers. Most polls, in fact, show him running dead last among Latino voters.

But would his racist rhetoric actually hurt his chances in a general election? As I wrote last fall, the Hispanic vote is very inefficiently distributed for the Electoral College. Daniel McGraw argued in Politico last year that, “The states that have a big Hispanic population and have big Electoral College vote numbers—California, Texas, New York, New Jersey, and Illinois—will not be in play in the 2016 presidential election.” Most pollsters project that all except Texas are solidly Democratic.

That means Trump, as the nominee, could alienate all the Latino voters he wants to, without fundamentally changing the electoral math going into a general election. But the type of language he uses could prove fatal for the Republican Party in the long term.