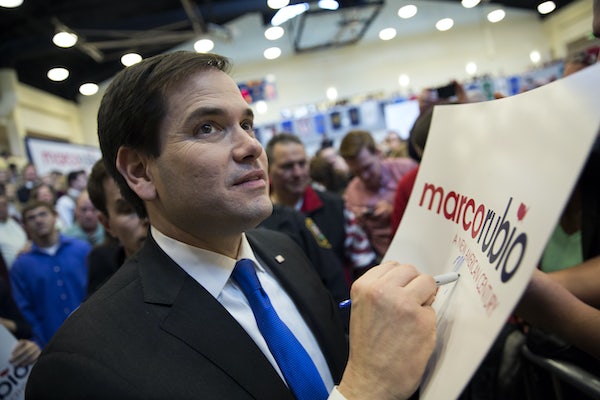 The GOP inadvertently rigged the delegate system in favor of Trump, forcing Rubio to scramble.

In many Super Tuesday states, Republican candidates who reach 50 percent get all the delegates in that state, and candidates who fall beneath 20 percent get none. The Republican Party created that system to help establishment candidates. But now it spells trouble for Rubio. He’s worried that Trump could clinch all the delegates in some Super Tuesday states, and that he, Rubio, could get zero.

This could explain his travel schedule in the final days before Super Tuesday. “There’s a very interesting pattern in the states Rubio is going to,” former Clinton adviser and senior Brookings fellow Bill Galston told me Friday. “With the sole exception of Virginia, all the states he’s touching down in have hybrid formulas.”

In those states, if Trump is nearing 50 percent in the polls, Rubio has to step in and knock off at least a few points off his final tally. Even if those voters go to Cruz or Carson, Rubio has to ensure that Trump doesn’t take all the delegates in states like Alabama, Arkansas, George, and Oklahoma, which all have 50-percent winner-take-all thresholds.