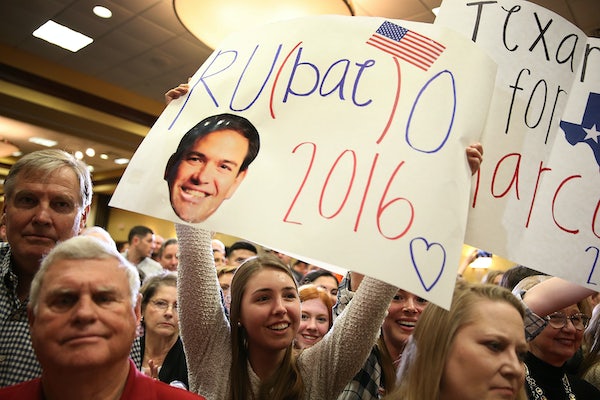 In Texas, all eyes are on Trump and Cruz, but Rubio’s the one to watch.

Most people will be looking at Trump and Cruz when the results of the Republican primary in Texas are announced Tuesday night. Cruz has to finish first in the Lone Star State, well above Trump, to have a path forward.

But the stakes are also quite high for Rubio. Because Republicans often use certain thresholds to allocate delegates on Super Tuesday, Rubio needs to clinch at least 20 percent to get any delegates in many states, including Texas, which, with its 155 delegates, would bring in a badly needed haul for the Rubio campaign. According to FiveThirtyEight, his PAC, Conservative Solutions, is airing ads in urban areas around the state: Dallas, Austin, San Antonio, and, interestingly enough, Houston, a Cruz stronghold.

Rubio may be hoping that Trump beats Cruz in the state, which would increase pressure for Cruz to exit the race. I wrote this week that commentators often disagree whether his exit would help Rubio, since his supporters could foreseeably back Trump when Cruz leaves the race. But his exit would be the single best way to shake up the current allegiances in this race, something Rubio desperately needs. That could be why Conservative Solutions is airing ads in Houston, where Ted Cruz lives, trying to undermine his support in his own backyard

So look for two things in Texas Tuesday night: Does Rubio clear 20 percent and does Trump beat Cruz? Rubio needs both to clear a path to the nomination.