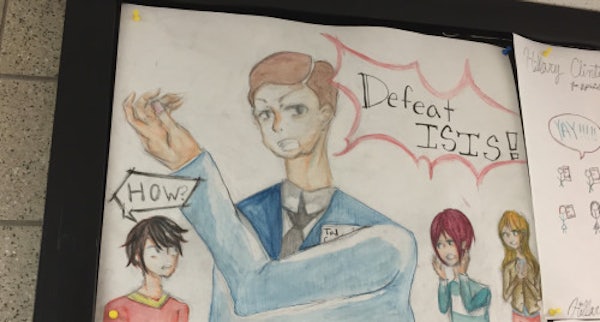 A middle-schooler’s hand-drawn Ted Cruz campaign poster asks the most important question about stopping ISIS: “How?”

This photo has been going around Tumblr with the caption, “The middle schoolers had to make campaign posters for the candidates and my favorite one is anime Ted Cruz.” Anime Ted Cruz is indeed very funny. But my favorite part is the haunting question, which is at the center of 2016’s foreign policy debate. All the candidates agree that ISIS is bad. No one wants to get into specifics about how to stop it. Cruz has called for “carpet bombing” ISIS, but he doesn’t seem to know what carpet bombing is, and his actual plan is quite similar to President Obama’s.

The Tumblr user who posted the photo is a senior at Cresskill High School in New Jersey. His name is Hayden. “I pass by the posters to 1st period every day and I thought the illustration of Ted Cruz was funny so I took a picture of it and uploaded it here,” he told me. The post has 28,500 notes. He added, “Artist is unknown.” A bit later: “very important but don’t mock the artist like a lot of other people are doing. Again it’s only a middle schooler.” We would never. The artist has made a vital statement about one of the most important issues of our time.