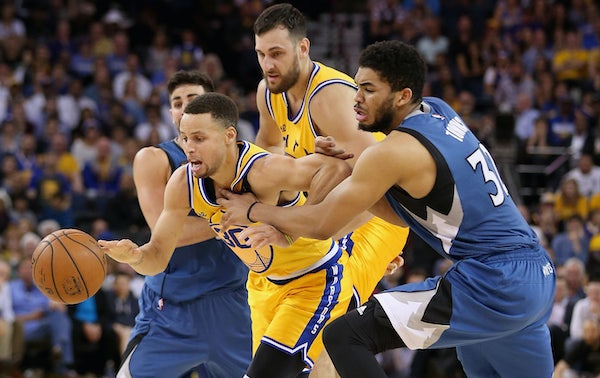 The Golden State Warriors can still get to 73 wins, but they’ll have to beat another historically great team twice.

Last night, the Warriors looked tired when they gave up a 17-point lead in the second half to lose to the Minnesota Timberwolves, a plucky group of youngsters who seem poised to be the next Oklahoma City Thunder (they’ll probably end up, as they always do, as the next Minnesota Timberwolves). Giving up 17-point lead is simply something the Warriors do not do, especially to teams that haven’t been in the playoff hunt since November. But that’s exactly what the Warriors did in the second half, as they rushed shots and dribbled the ball off their feet and fouled a bunch.

But the Warriors should be tired! The NBA season is an 82-game grind, especially so when you’re chasing 73 wins and the greatest season in NBA history. And when you do that, you tend to fall asleep for a game or two, which helps explain why the Warriors have failed to be beat lowly teams like the Lakers or the Timberwolves. The 95-96 Chicago Bulls also got tired, after all: two of their last three losses came by one point to a mediocre team (the Charlotte Hornets) and a terrible one (the Toronto Raptors). The Warriors’ next four games are against the Memphis Grizzlies, who are being held together by wire and string, and the San Antonio Spurs, who are also historically great—they could become the first team to go undefeated at home and they have a better win differential than Golden State.

The Warriors can do it, in other words—it’s just four games and then it’s the playoffs, where everything will be so much easier.