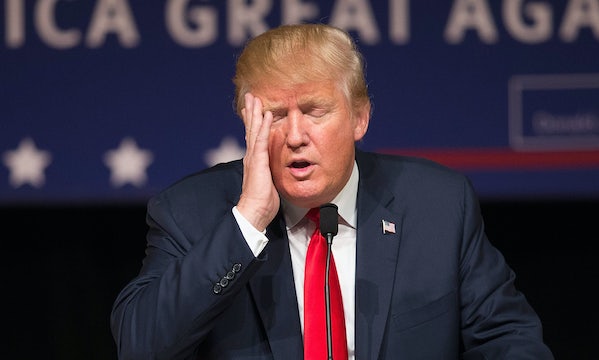 It’s been a rough couple days for Trump. First, there were the revelations that his Trump University was likely a brazen scam designed to prey on the poor and desperate. Then there was the troubling way he singled out the judge who ordered the release of the Trump University documents—the judge was subject to Trump’s signature threats and race-baiting, what rattled legal experts described as a “a remarkable disregard for judicial independence,” according to The Washington Post. Now comes a piledriver of a foreign policy speech from Hillary Clinton, who laid bare a series of painfully obvious reasons why Trump shouldn’t be allowed near the nuclear codes.

Corruption, racism, thuggery, incompetence—it’s Trump in a big ugly nutshell. The interesting aspect is that all these characteristics were evident months ago, in the heat of the Republican primary race. The difference is that they look way scarier and crazier in the new light of a general election campaign that involves people outside the GOP electorate. There’s been a lot of talk about how the mainstream press has normalized Trump, but the mainstream press is just as aghast at the thought of a demagogic fraud being president. He was, in fact, normalized by the primary, when his opponents declined to attack him or failed to call him out forcefully enough, hoping to get some of Trump’s supporters. Trump at the time appeared to be invincible, a juggernaut, but he is suddenly starting to look like his real self again: a clown, a huckster, a weirdly coiffed conspiracy theorist.