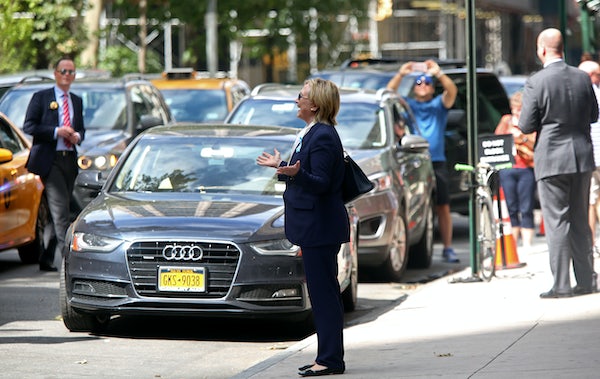 Less than two months before Election Day, the presidential race is closer than it should be.

A new poll from Bloomberg shows Donald Trump up by five points over Hillary Clinton in Ohio, the latest evidence that the battleground state will be competitive come November. Clinton is still up by 0.3 points in the Real Clear Politics average of polls—a CBS/YouGov poll released just days ago had Clinton leading by five—and Five Thirty Eight forecasts that Clinton has a 56 percent chance of winning Ohio. But the overall trajectory since the conventions in July has shown a race that is tightening, both in Ohio and the country at large.

Clinton is still the heavy favorite. However, as Ross Douthat writes in his column today—ominously titled “How Trump Might Win”—it’s not unthinkable that she could lose, given the way the Electoral College is set up and the presence of two other candidates in the race, Jill Stein and Gary Johnson. Trump, he writes, “needs Clinton’s potential support to be depressed, which means he needs outside events to raise constant doubts about her leadership, and beyond that about the entire political establishment that she embodies.” Her bout with pneumonia is just such an event.

How did we get here? How is there even a speck of a doubt that Clinton might lose to Trump? In a series of columns, Brian Beutler has argued that her less-than-impregnable position can at least be partly attributed to the media, which has equated her comparatively banal controversies with Trump’s numerous disqualifying flaws. There is also the fact of polarization, the driving force in American politics, which would make a race between almost any Republican and Democrat relatively close. Clinton was also more damaged by the Democratic primary than has normally been acknowledged, as Jonathan Chait notes, particularly among younger voters.

In one respect, according to the historical cycle of presidential politics, Clinton should be the underdog. On the other hand, this is Donald Trump we’re talking about. The economy is performing at a post-recession high, and the Democratic incumbent is popular. The candidate herself is clearly part of the problem, and early polling from the pneumonia controversy indicates that suspicions about her health are already being linked to suspicions about her trustworthiness. The question is whether Clinton wants to aggressively address these doubts, no matter how unfair or sexist they might seem, or grit her teeth and hope for the best as she barrels toward the finish line. My bet would be on the latter.