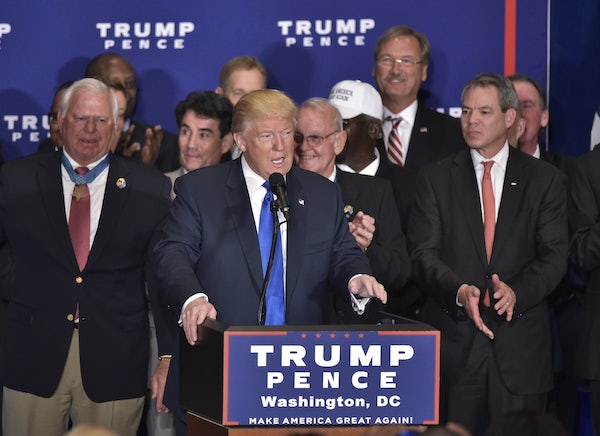 For the last five years, Trump has pushed the racist lie that President Barack Obama was not born in the United States. He has profited handsomely from it—he would not be the Republican nominee for president if he had not first become the leader of the so-called birthers. As recently as last year, Trump claimed that Obama’s birth certificate was fake.

On Friday, Trump promised that he would finally put the issue to rest in a much-touted speech. He did no such thing.

Instead, Trump promoted his new hotel in Washington, D.C., then introduced a series of veterans who praised him and attacked Hillary Clinton. As Fusion’s Katie McDonough pointed out on Twitter, it was no accident.

After nearly 30 minutes of free air time—a glorified infomercial—Trump finally returned to the podium and said this: “Hillary Clinton started the birther controversy. I finished it. You know what I mean. President Barack Obama was born in the Untied States, period. Now we all want to get back to making American strong and great again. Thank you very much.” Then he walked off the stage.

This is inexcusable, even by Trump standards. Hillary Clinton did not start the birther controversy, and has never said that Obama was not born in the United States. He certainly did not finish anything—Trump was still questioning Obama’s place of birth years after Obama released his long-form birth certificate. In less than 30 seconds, he told two huge lies.

Trump will use this as a means to deflect questions about his birther stance. He will claim that he said Obama was born in the United States. But that’s not enough. By claiming that he “finished” the controversy, he is arguing that questioning Obama’s citizenship was legitimate. It never was. Until Trump takes responsibility for his birtherism, this is still an issue and the press should continue to hound him for it.