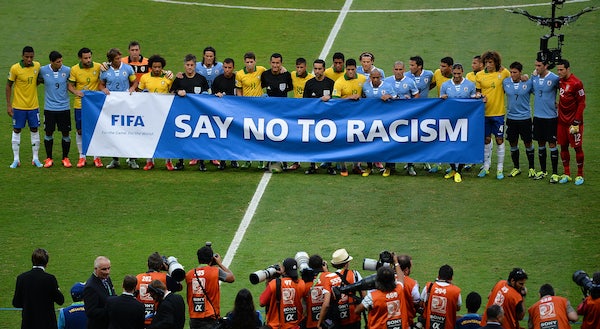 No, really. According to FIFA General Secretary Fatma Samba Diouf Samoura, the Taskforce Against Racism and Discrimination has fulfilled its mandate and is henceforth “dissolved and no longer in operation.”

This is record time, and anti-racism organizations all over the world would do well to learn from FIFA. Two years ago, FIFA’s own head of the anti-racism initiative, Jeffrey Webb, confessed the organization wasn’t doing nearly enough to reach this very goal.

In the last couple years, we have seen swatikas etched into pitches, leading figures like the Italian FA president and coaches decry the presence of black players, and fans all over Europe making monkey chants and throwing bananas at players of color on the field.

This declaration means we can expect an end to all of these occurrences, although the international body, paradoxically, accomplished this great feat by doing nothing. Osasu Obayiuwana, a member of the task force, told the AP that they “never had a single meeting” under Constant Omari, who replaced Webb after he was charged with racketeering during the Department of Justice’s investigation into FIFA.

This end to racism is especially timely given that the next World Cup is in Russia, where incidents of racism happen in “every game” and were “guaranteed” to occur at the 2018 event. Soccer fans the world over can rest assured that if we see any bananas thrown at the next World Cup, it’s in good faith and simply out of concern to provide players of color with more potassium to see them at their best.