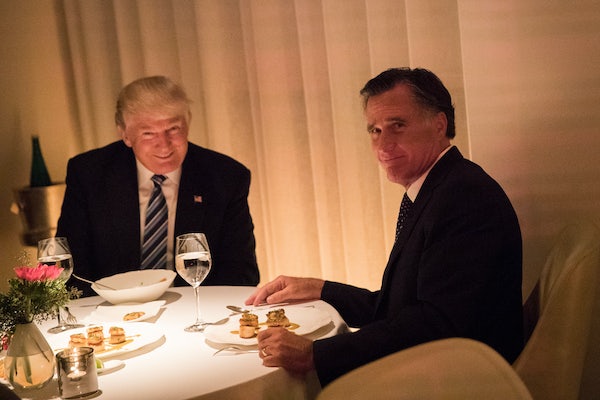 Mitt Romney sounded the death knell for #NeverTrump in the most Mitt Romney way possible.

My favorite moment from the 2012 Republican primary was when Romney addressed the accusation that he had hired undocumented immigrants to work on his lawn. In an October 2011 debate, Romney claimed he was aghast when he found out. He went to the landscaping company and told them, “Look, you can’t have any illegals working on our property. I’m running for office, for Pete’s sake, I can’t have illegals.” This is absolutely how Mitt Romney would react to “illegals” working on his lawn. For a politician who struggled to connect with voters, here was a glimpse of his authentic self. It just turned out that his authentic self was a guy running for president.

Romney was similarly revealing last night, when speaking to reporters after having dinner with Donald Trump at Jean-Georges to discuss becoming Trump’s secretary of state. Romney, you will remember, delivered a speech earlier this year declaring that Trump was unfit to be president. He said that under President Trump, “the country would sink into a prolonged recession.” He said Trump’s foreign policy, which Romney, if nominated, would be carrying out as his secretary of state, “was recklessness in the extreme.” He declared that “dishonesty is Trump’s hallmark” and that he “lacks the temperament to be president.” So what changed?

As Romney explained, “He did something I tried to do and was unsuccessful in accomplishing: He won the general election.” This is undoubtedly true. This is the only difference between Trump one month ago and Trump today. And it says everything you need to know about Mitt Romney and all the other Trump critics on the Republican side who are now happily lining up to kiss the ring.