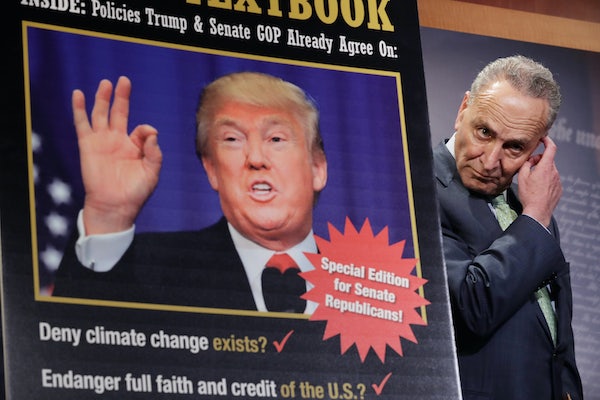 During the campaign, Trump repeatedly made two claims: that he was a brilliant negotiator and that the key to expert negotiation was to never show your opponent your cards. But on Wednesday, Trump violated his cardinal rule by playing pundit and telling congressional Republicans how they should sell repealing Obamacare:

Trump, who said he will begin repealing Obamacare on day one, is urging Republicans to focus intently on Obamacare’s flaws and ignore its virtues. In his formulation, they are taking away people’s insurance, but destroying something that is doomed to fail anyway.

But there are a number of problems with this strategy. The first is that Trump just gave the game away, revealing the cynicism behind any Republican action to avoid blame for causing millions of people to lose their health insurance. The idea that these people will buy Trump’s fantasy version and not the very real consequences of repeal is outlandish. The second is that this isn’t a change in strategy at all—not really. Republicans have spent years doing more or less exactly this and the law is still here.

The third flaw is that the Democrats’ message on Obamacare is simpler. Chuck Schumer told Politico that Democrats plan on using the slogan “Make America Sick Again” to describe repeal. That is embarrassingly on the nose and too clever by half. But the core message is much simpler than Trump’s plan to blame Democrats who have no power. Here’s Schumer again, laying out the message:

“It’s chaos rather than affordable care. Because once you repeal and don’t replace it with anything, lots of things happen. Costs go up. All the insurance companies and everybody else in charge are going to charge a lot more because they are not sure what’s going to happen. You’re going to lose a lot of benefits, unless the Republicans put tens of billions of dollars down on the table. … They are like the dog who caught the bus. … Because you cannot repeal a plan and put nothing in its place. It doesn’t matter if you say the repeal won’t take place for a year or two years.”

Schumer knows that it’s Republicans, not Democrats, who are the hostages here. They’re the ones who will be blamed for the fallout.