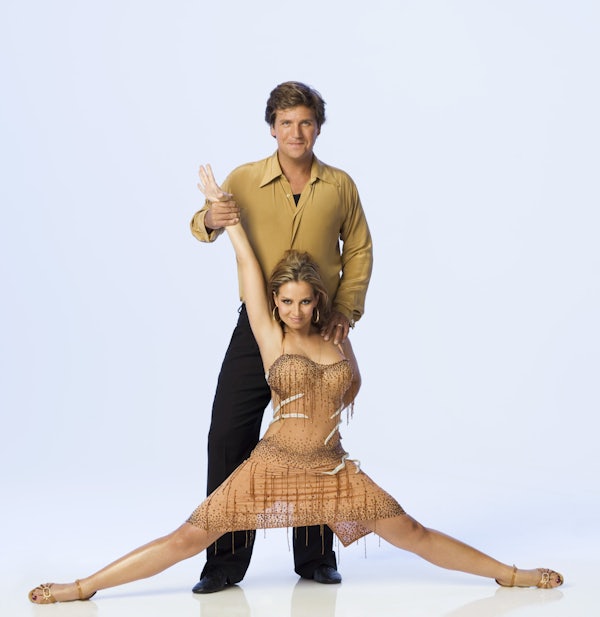 The glorious Tucker Carlson comeback no one asked for is now complete.

After Jon Stewart eviscerated him (and Paul Begala) in one of the first viral rants of the 21st century, Carlson—once a rising star in the world of bow-tied conservative media—had a very hard go of things. Here’s Jason Zengerle writing in The New Republic in 2010:

If you’re a journalist, chances are you’ve had some pretty low moments in the last few years, as your industry has imploded all around you. But, in your darkest hours, you were always able to console yourself with one thought: At least I’m not Tucker Carlson.

Carlson left CNN not long after Stewart destroyed his credibility and that of Crossfire, which was canceled shortly thereafter. He went to MSNBC and hosted another show that was canceled after two years. He then went to our nation’s greatest rehabilitation project, Dancing with the Stars, where he somehow failed to be rehabilitated, largely because he only lasted one episode. He then founded The Daily Caller, where he served as editor-in-chief until November of last year. Ostensibly founded as a new online hub of conservative journalism, The Daily Caller almost immediately became known for publishing garbage listicles like “13 Syrian Refugees We’d Take Immediately.”

But now, after only a couple short months filling in for Fox News’s Greta Van Sustren, Carlson is back, and in a huge way. Fox News has given him Megyn Kelly’s coveted 9pm slot. “The dramatic move caps Carlson’s rapid rise at the nation’s top-rated cable channel,” Matt Drudge wrote, recasting the one-time has-been as a rising star.

This is undoubtedly a step down for the network from Kelly, who despite her race-baiting was a genuine star. What they’ll get instead in Carlson is a smarmier and younger (though admittedly less angry) O’Reilly. Though Carlson was once a gifted magazine writer, his TV work is notable only for its profound disingenuousness, as Carlson’s interview of Teen Vogue writer Lauren Duca will testify. But the Carlson move also says that Fox News in the Trump era may not be so different than the old Fox News—which is to say very white and very disingenuous.