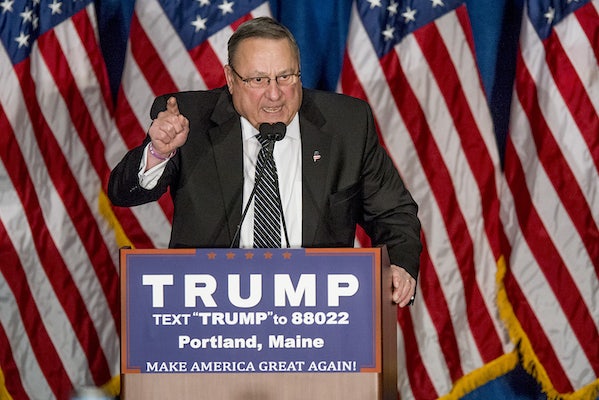 LePage, a Trump supporter, is none too happy with Lewis. The civil rights icon recently told Meet the Press’s Chuck Todd that Trump will not be a “legitimate president,” and announced he would not attend the inauguration for the first time in his congressional career. “John Lewis ought to look at history,” LePage said in an interview Tuesday with WVOM, a Maine radio station. “It was Abraham Lincoln that freed the slaves. It was Rutherford B. Hayes and Ulysses S. Grant that fought against Jim Crow laws. A simple ‘thank you’ would suffice.”

Where to begin? How about the fact that Lewis is a genuine national hero. The longtime congressman was one of the “big six” organizers of the March on Washington in 1963. Lewis has been arrested more than 40 times, and has suffered brutal beatings at the hands of police in the struggle for equal rights. And he recently added a Presidential Medal of Freedom and a National Book Award to his resume. In other words, John Lewis is the last person on earth who needs a lecture on the history of slavery and civil rights.

What’s worse, not only do LePage’s remarks reek of casual racism, they’re also just plain wrong. Jim Crow laws didn’t go into effect until after the Grant administration. And it was the election of Hayes that ushered in the end of Reconstruction, ripening the landscape for the institution of Jim Crow.

This is all to say nothing of the deeply flawed logic of LePage’s argument:

Sadly, this kind of outrageous behavior is par for the course for LePage, who has been making Trump-like statements before Trumpism was even a thing. Let us never forget the time he told the NAACP to “kiss my butt.”