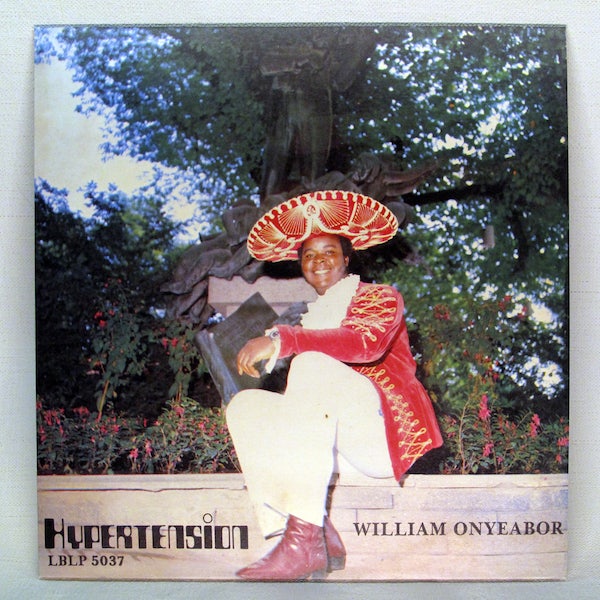 The cover for Hypertension. Photo via: luakabop.com

The visionary funk musician has died at age 70. From the mid-70s to the mid-80s, Onyeabor recorded nine albums. All of them had spectacularly good titles, like Great Lover (1981), Hypertension (1982), and Atomic Bomb (1978). He is perhaps best known for his song “Better Change Your Mind,” which is characteristic of his synth-rich, melodic sound. Newcomers to Onyeabor’s oeuvre could start with the luscious “Good Name.”

Onyeabor worked mostly alone at his own studio, which was filled with imported analog equipment. He then pressed his records at Wilfilms Limited—his own enterprise. After this extraordinarily prolific period, Onyeabor turned to various business enterprises. He was born again in 1985, according to the record label Luaka Bop.

Onyeabor’s music came to widespread international attention in 2013, when Luaka Bop managed to get in touch with him after five years of searching. Founded by David Byrne of the Talking Heads, Luaka Bop reissued Onyeabor’s music (after some convincing) on the compilation record Who is William Onyeabor? Onyeabor did not indulge the publicity that surrounded his international “comeback” of recent years with interviews.

Onyeabor’s distinctive sound is often called synth-funk, which slightly disguises the strangeness of his process. He used strangely childish sound effects from time to time, over sophisticated horn and guitar work. His relaxed, almost angular vocals were often backed by woman singers. His keyboard work was joyful and varied.

Onyeabor was six-foot-five. He died after a short illness. He was born outside Enugu, Nigeria (formerly the Biafran capital), and died there. He is survived by four children and four grandchildren. Watch the Noisey documentary about Onyeabor here: