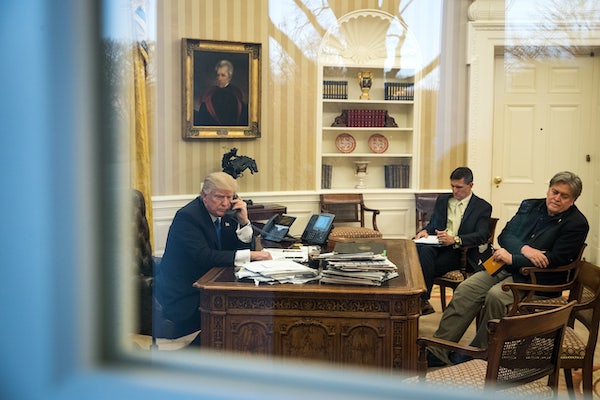 On Wednesday evening, reports of contentious calls between Trump and the prime minister of Australia and president of Mexico leaked to the press. In the former, Trump berated Malcolm Turnbull for a deal made with the Obama administration involving refugees; in the latter, he offered to send troops to Mexico to fight “bad hombres.” (The AP originally reported that Trump threatened something along the lines of an invasion of Mexico, but reporting by CNN suggested that Trump was offering to send troops to help fight something—cartels? illegal immigration?—albeit in a not-at-all diplomatic way.)

These calls are deeply embarrassing. Trump clearly doesn’t have the slightest idea what he’s doing. It’s unclear if Trump’s new sheriff-in-town swagger is political or psychological in nature. Trump may just be showing dominance in these early calls—a real estate developer trait if there ever was one—so these foreign leaders know to fall in line when the time comes. Or he may just need to show dominance because he’s the most insecure man on the planet. More than likely it’s a bit of both.

But the calls also raise two important questions: Who is leaking? And why? Here’s the simplest explanation:

But another question worth asking is how the Trump administration feels about these leaks. After all, Trump and Steve Bannon have promised to upend the international order and reports of a volatile, swaggering Trump fit that image. This is Trump’s first two weeks in miniature—horrifying a significant portion of the country is an end in and of itself. Trump is doing exactly what he promised his supporters he’d do: break stuff.