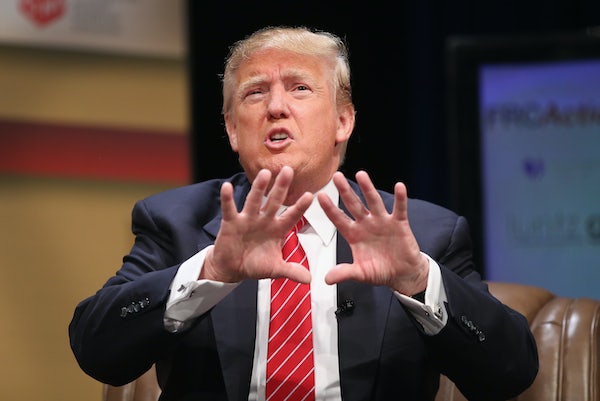 Donald Trump’s financial trust is an even bigger sham than we thought.

At a press conference on January 11, lawyers for Trump said he would be placing his businesses in a trust to be overseen by his sons, thus “completely isolating himself from his business interests.” This trust was criticized from the start as failing to offer a real solution to Trump’s conflict-of-interest problems and falling well short of what has been required of past presidents. But it turns out Trump’s trust is even less transparent and more open to abuse than previously thought, thanks to a quiet revision in the rules of the trust that was spotted by the watchdog group ProPublica.

A small phrase buried deep in a set of recently released letters between the Trump Organization and the government shows just how little separation there actually is.

Trump can draw money from his more than 400 businesses, at any time, without disclosing it.

The previously unreported changes to a trust document, signed on Feb. 10, stipulates that it “shall distribute net income or principal to Donald J. Trump at his request” or whenever his son and longtime attorney “deem appropriate.” That can include everything from profits to the underlying assets, such as the businesses themselves.

This change will allow Trump to gain greater information about his businesses (discovering which are profitable and which not) even as he serves as president. He also doesn’t have to report to the public any of the financial activities he makes under the new rules, so he could be shifting funds from his businesses to his bank account without public knowledge.