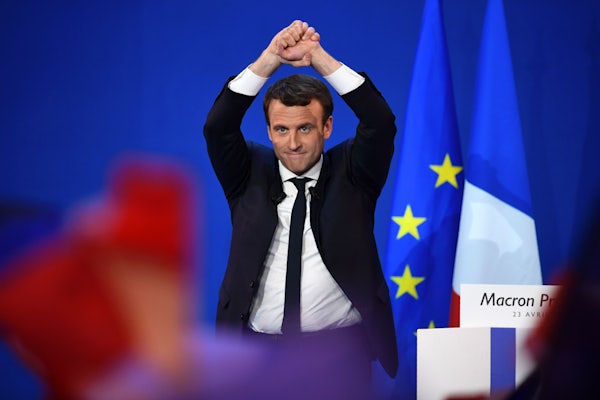 Every country in the Western world must face down their Trumpian demons, and France appears to have survived the great test. Emmanuel Macron, an independent centrist, is set to face off against the far right’s Marine Le Pen in a run-off scheduled for May 7. Although Macron and Le Pen were separated by only a couple of percentage points, Macron is a shoo-in according to pollsters, as politicians across the spectrum, with the notable exception so far of the far left’s Jean-Luc Mélenchon, throw their lot in with Macron. Though Le Pen was able to ride a nativist-populist wave to bring her National Front to unprecedented heights—which in itself will likely have profound effects on French politics—in the end her party was deemed, by voters on both the right and the left, to be too backward and too racist to lead the country.

But imagine what would have happened if Le Pen were a little less racist and backward, and if her party were not still associated with the more overt neo-Nazism of her father Jean-Marie Le Pen. Her attacks on the European Union—a two-headed beast of open borders and a globalized economy—clearly had widespread resonance. Her campaign was taking place against a backdrop of 10 percent unemployment; imagine, if you possibly can, what insane hell would have been unleashed on American politics if the economy remained at or near its Great Recession high for nearly 10 years. This is the product of years of failed policies by France’s two mainstream parties, both of which proved unwilling or unable to challenge the ruinous austerity agenda emanating from Europe’s true power center in Berlin. In fact, one of the reasons for Mélenchon’s surprise success was that he was able to win back traditionally liberal voters who had gravitated toward Le Pen’s anti-EU positions.

Macron—ironically or tragically, depending where you sit—is essentially promising more of the same. His moderate platform strikes a balance of appealing to middle- and working-class voters voters (more stimulus, no hike in the retirement age), to Berlin’s budget obsessives (fewer government workers, cuts in public spending), and big business (a cut in the corporate tax rate). “He is not offering a rupture, he wants to keep reforming while maintaining fiscal discipline,” one Socialist official told the Financial Times. “It’s the Socialist Party freed from the left of its left.”

It is to Macron’s great benefit that France’s electorate is split on various axes. There is the much-publicized populist vs. globalist split, and here Macron falls on the side that is floundering in the U.S. and Britain. But there is also the insider vs. outsider split, and this appears to be the main source of Macron’s strength. He does not represent one of France’s two loathed mainstream parties, and he is not a racist like Marine Le Pen. But centrism in France has already failed on a policy level—what remains to be seen is how popular it will remain as a sheer political posture.