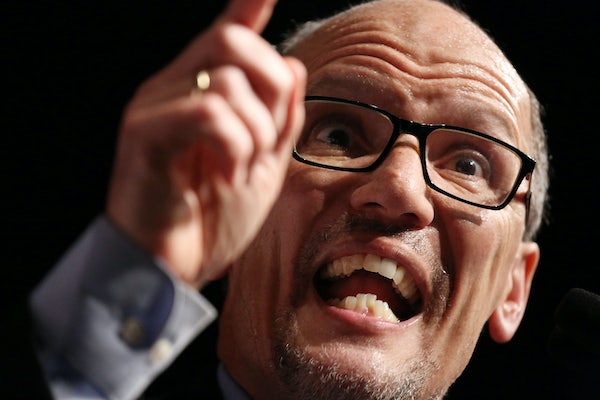 The Democratic Party can’t cuss its way back to political relevance.

Warning its audience, “This post contains profanity and language readers might find offensive,” CNN reported Monday on the Democratic national chairman’s newfound cussing habit. At a rally in Las Vegas over the weekend, with children standing behind him, he said President Donald Trump “doesn’t give a shit about health care.” That followed a rally in Portland, Maine, one week ago, where Perez declared “Republican leaders and President Trump don’t give a shit about the people they were trying to hurt.” The chairman used the s-word to describe GOP budget proposals that day, and last month he said, simply, “Republicans don’t give a shit about people.” All of this appears to be part of an intentional branding strategy by the Democrats:

DNC spokeswoman Xochitl Hinojosa defended Perez’s language to CNN by saying, “Tom is angry, and he’s angry because Donald Trump continues to stick it to the American people.”

This is ridiculous. Even if most voters get past the spectacle of a major party chair cursing in front of kids, they’re going to see all this swearing for what it is: an act of desperation. Maybe Perez thinks he’s showing toughness against Trump, who’s prone to foul language. Or maybe he’s doing a bad imitation of his recent roadshow buddy Bernie Sanders, who certainly shouts a lot but doesn’t typically disparage Republicans in such broad, boorish terms. Either way, Perez is trying too hard to be the cool dad, and it’s embarrassing to the party.