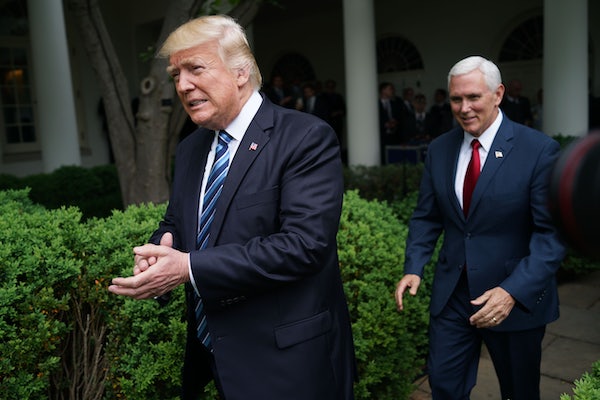 Democrats shouldn’t spike the football, either.

Donald Trump and Paul Ryan have rammed the AHCA through the House, and it’s already being lauded by Republicans as a massive victory. When the House reached the 216 votes needed to pass the bill, there was elated applause. Strangely, Democrats were celebrating, too:

The point that Democrats are trying to emphasize is that House Republicans have just jeopardized their re-election chances by voting to pass a terrible bill that has very little chance to pass the Senate in its current form. They are probably right—Trumpcare, which was hobbled together in the dark by a bunch of gremlins, is wildly unpopular among almost all factions, including voters. As my colleague Alex Shephard points out, the bill does the opposite of what people want, which is better coverage and lower costs. It’s a political disaster in the making for Republicans.

But the political theater here—of Democrats singing jubilantly to the passage of a bill that will literally kill people—is misguided. They could have echoed protesters outside of the chamber, who were chanting, “Shame, shame, shame.” At the very least, Democrats should have emphasized that this was a somber and serious moment.

Appearances matter, and singing triumphantly after Trumpcare passes the House suggests that Democrats are playing political games with people’s lives. It will only get worse if Nancy Pelosi and Co. echo that message in the cable news rounds this evening. In other words, it doesn’t look great when both sides are spiking the football. Democrats should stick to pointing out the grim fact that Republicans are willing to sacrifice the lives of their constituents to pass tax breaks for the rich.