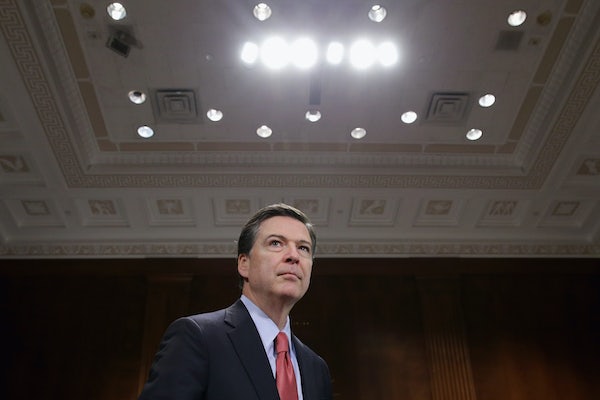 The Republican response to James Comey’s firing has been pathetic.

We now know that the attorney general’s office was tasked with finding reasons to fire Comey. We can say, with some certainty, that the reason given for Comey’s firing—his handling of the Clinton email investigation—was concocted for political reasons, since Trump very publicly welcomed Comey’s interference on the campaign trail. And we can say, with even more certainty, that Comey was fired because Trump had grown weary of the FBI’s investigation into Russia.

As Politico reported, Trump “had grown enraged by the Russia investigation, two advisers said, frustrated by his inability to control the mushrooming narrative around Russia. He repeatedly asked aides why the Russia investigation wouldn’t disappear and demanded they speak out for him. He would sometimes scream at television clips about the probe, one adviser said.” By firing Comey, Trump hopes to make this investigation go away. He is betting that the short-term pitfalls (the ongoing shitstorm) will be worth the long-term gains.

Whatever you think of Comey’s performance over the last year—the conventional wisdom is that it was “bad”—it’s obvious that he was not fired over his handling of the Hillary Clinton email probe, Trump’s cries of Democratic “hypocrisy” notwithstanding. It’s also obvious that his firing has something to do with the FBI’s Russia probe.

The White House is counting on Congress to confirm an FBI director who will move on from what Donald Trump has repeatedly decried as a pointless, intrusive, and expensive investigation. But as many Democrats have pointed out, now is the time for a special prosecutor—it has become abundantly clear that the White House will go to extreme, unethical, institution-destroying lengths to protect itself from a probe.

Republicans, however, have been muted in their response to Comey’s firing. Many seem to have deluded themselves into thinking that the timing of the event is the main issue. As Axios Presented By Koch Industries reported on Wednesday morning, “In a swirl of sobering questions about the Constitution and the rule of law, many Republicans are asking simply: Why now? Why?!”

Republicans who have spoken out publicly, as Slate’s Eliot Hanlan pointed out, have also done so in muted fashion. Senators Richard Burr and Ben Sasse are “troubled.” John McCain is “disappointed.” Marco Rubio is “surprised.” Jeff Flake just can’t figure this dang thing out. An outside adviser to the White House told Axios, “They just barely got the tiniest bit of momentum going after the House health care bill, and now it’s like the engine has fallen out of the car. The Russia thing will now go on forever. And the rationale in the letter was preposterous. This was a tremendous miscalculation.” How could Trump do this when Republicans were only months away from cutting thousands of people’s health care??

Republicans have so far failed to act as a check on Trump in any meaningful way, but Comey’s firing is the greatest subversion of the rule of law during Trump’s presidency. If Republicans don’t step up now, then they never will.