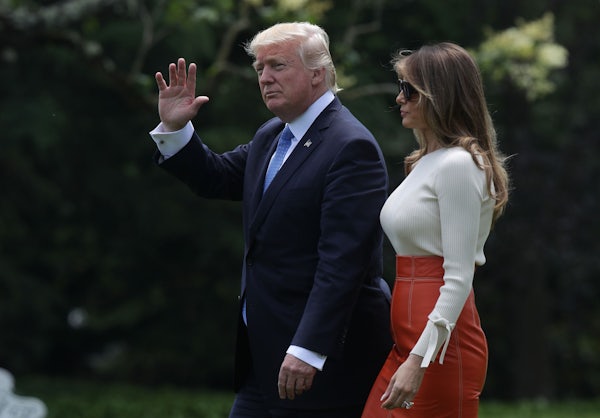 Trump calling James Comey a “nut job” is the perfect ending to this insane week.

Trump may have been dreading his trip to the Middle East, but it could have acted as a kind of palate cleanser. After all, Nixon and Clinton both found comfort in overseas trips during political crises. At the very least, the trip would force other issues—Trump’s foreign policy and his reception in the Arab world—to the forefront.

Trump has only been gone for a couple of hours, but there is no sign that the flood of leaks from the White House will stop now that he’s gone. Within minutes of each other, two major scoops dropped. The New York Times reported that Trump bragged to two Russian officials about firing “nut job” James Comey. He allegedly told them, “I faced great pressure because of Russia. That’s taken off.”

Then The Washington Post reported that the FBI investigation into Russia’s interference in the election “has identified a current White House official as a significant person of interest.” That is very vague—and “person of interest” doesn’t mean a whole lot—but this person nevertheless sounds like a very senior person. “The senior White House adviser under scrutiny by investigators is someone close to the president,” according to the Post. (Is it Jared?)

It’s a fitting end to what has been a completely insane week. Over the last five days we’ve learned that Trump revealed highly classified information to Sergey Lavrov and Sergey Kislyak; that James Comey kept records of his meetings with the president showing that Trump tried to interfere with the FBI’s investigation into Michael Flynn; that the White House knew Flynn was under FBI investigation when he was brought on as national security advisor; and that Robert Mueller had been appointed as special counsel in the Department of Justice’s investigation into Russian interference in the 2016 election.

The two latest stories offer two key lessons. The first is that Trump has truly terrible instincts and little impulse control. Speaking in this fashion to the Russians, one of whom is a well-known spymaster, is incredibly stupid and short-sighted. The second is that Trump is screwed. The slow drip of Russia news has become a torrent. The investigation into Russian interference keeps getting closer to Trump and Trump keeps doing himself no favors.