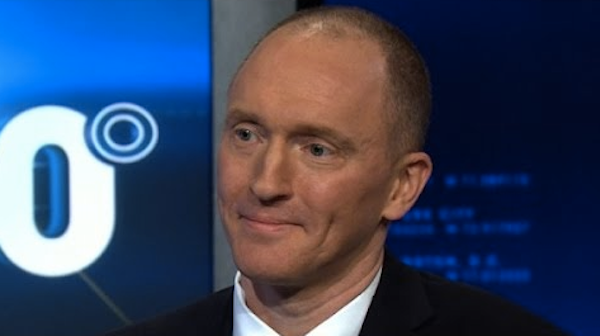 So does Donald Trump know Carter Page or not?

This has been one of the most persistent subplots of the Russia scandal. Page has been a central player in the investigation into the Trump campaign’s ties to Russia, but members of the campaign, including Trump himself, have sent mixed signals about his exact role, or if he had one at all.

When Trump was asked by The Washington Post last March who was advising him, Trump listed “Carter Page, PhD” as a member of the campaign’s foreign policy team. This was a strange choice, given that Page had no foreign policy experience beyond working in and on behalf of the Russian energy sector. The Trump campaign subsequently cut ties with Page after he claimed that Vladimir Putin was a better leader than Barack Obama (an assertion Trump himself would later make) and said, “Washington and other Western capitals have impeded potential progress through their often hypocritical focus on ideas such as democratization, inequality, corruption, and regime change.” The campaign’s communications director, Jason Miller, said that Page had “never been a part of our campaign. Period.”

But on Wednesday, Trump tweeted about Page as if he were an ally.

Trump was presumably watching Fox & Friends when he tweeted this—they reported this morning that the Senate Intelligence Committee had delayed Page’s testimony. Trump’s tweet is not exactly accurate: Delaying his testimony is not the same thing as “not wanting him to testify.” Regardless, once again—and surely not for the last time—Trump’s relationship to Page has evolved to fit the circumstances.

In any case, judging from Page’s incredible self-owning performance on Up With Chris Hayes, his testimony before Congress might not be the slam dunk Trump seems to think it will be.