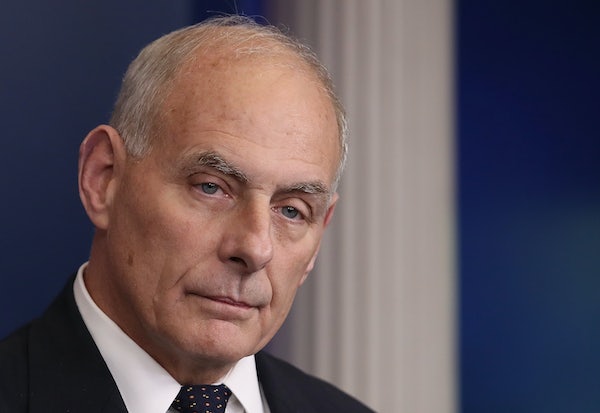 John Kelly’s attempt to turn Frederica Wilson into a lying villain has backfired.

Yesterday, White House Chief of Staff John Kelly spent 20 minutes excoriating the press for being out of touch, leveraging his own credibility to shield President Trump from criticism of being insensitive to the deaths of four Green Berets, and claiming that Rep. Frederica Wilson—who reported that Trump told the widow of one of those soldiers that her husband “knew what he signed up for”—had a reputation for dishonesty.

During Kelly’s press conference, he attacked Wilson for allegedly acting disrespectfully during the dedication of an FBI field office in Miramar, Florida, to two FBI agents who were killed in a gunfight.

And a congresswoman stood up, and in a long tradition of empty barrels making the most noise, stood up there in all of that and talked about how she was instrumental in getting the funding for that building, and how she took care of her constituents because she got the money, and she just called up President [Barack] Obama, and on that phone call, he gave the money, the $20 million, to build the building, and she sat down. And we were stunned, stunned that she’d done it. Even for someone that is that empty a barrel, we were stunned.

The problem here was that, as video that has since surfaced proves, what Kelly said wasn’t true.

In this video, Wilson doesn’t take credit for getting the money for the project. Instead, while she praises lawmakers for quickly allocating funding for the building, she spends a significant amount of time discussing the two FBI agents who were being honored. “I was not even in Congress in 2009 when the money for the building was secured,” Wilson told CNN on Friday. “So that’s a lie. How dare he. However, I named the building at the behest of [then-FBI Director James Comey] with the help of [then-House Speaker John Boehner], working across party lines. So he didn’t tell the truth.”

The White House, however, is doing what it always does—refusing to acknowledge that anything improper happened.

Asked about the distortions in Kelly’s remarks, Sarah Huckabee Sanders used Kelly’s military service to deflect criticism, saying, “You want to go after General Kelly—that’s up to you. If you want to go after a four-star Marine general, go ahead.”

Throughout this scandal, the Trump administration’s response has been to lie and to use military service as a shield from criticism. Looks like they’re not abandoning that strategy anytime soon.