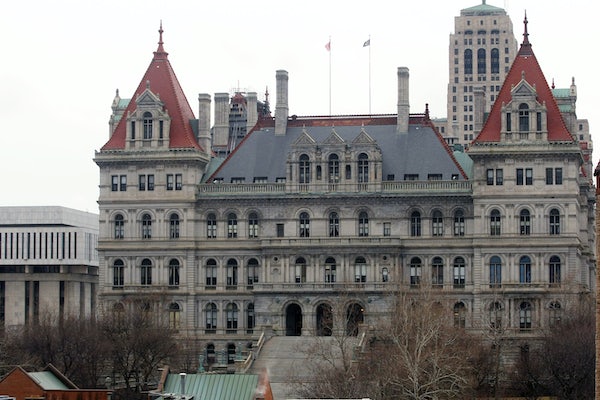 A New York state constitutional convention would be very risky.

Today, New Yorkers have their once-every-20-years opportunity to approve or reject a state constitutional convention. Supporters argue that the potential wins are great, since Albany is now so corrupt that a revised constitution is the best path to reform. This claim is half true: Albany is corrupt. But it doesn’t necessarily follow that a constitutional convention in 2019 is the best way to tackle that problem. In fact, a convention could simply increase the left’s woes.

Ann Marie Taliercio, the AFL-CIO president for the Central New York Area Labor Federation, has argued that the convention leaves collective bargaining rights, pension funding, and benefits for injured workers open to attack from the very legislators who now wield power in Albany:

Elected officials, including state legislators, can run to be delegates and can collect double their salary. In past conventions they even earned additional pension credits.

There is no doubt that corporations, their lobbyists, and Albany politicians would take advantage of the system to rewrite the state constitution to weaken workers’ rights and protections.

The leadership of the last convention, in 1967, was dominated by sitting state legislators. And even if that isn’t the case in 2019, it’s far from guaranteed that the convention’s delegates would move New York in a progressive direction. According to The New York Law Journal, groups including the Legal Aid Society, the New York Civil Liberties Union, and Environmental Advocates of New York oppose the convention for precisely this reason:

“We’re very concerned that there is far more to lose than there is to gain,” said Ron Deutsch, the executive director of the Fiscal Policy Institute.” We’re concerned about what we believe is a rigged delegate selection process. Three delegates are selected from heavily gerrymandered Senate districts all across New York state and independent people not affiliated with parties have much higher hurdles to clear to become engaged and involved in this process and to become delegates.”

A convention in 2019 would face a series of obstacles for progressives. They would first need enough delegates to support their agenda; then voters would have to approve that agenda at the polls. That’s a gamble any year, but two years is not enough time for even an empowered left to accomplish the sort of political work necessary to ensure success. As Brian Master, founder of the Working Families Party’s New York state chapter, noted at The Nation, New York isn’t as blue as it sometimes seems from Manhattan:

While convention proponents cite an upsurge in progressive social and political movements like Occupy Wall Street, Black Lives Matter, immigrant-rights mobilizations, and the Bernie Sanders campaign as evidence of a leftward surge that could carry a reform agenda in a constitutional convention, it’s essential to remember the flipside: Donald Trump won 45 of the state’s 62 counties in 2016, and a late, post-Comey Trump surge in suburban and exurban New York Senate districts sent several Democratic State Senate candidates to defeat.

The simple truth is that there are smarter ways for the left to affect change without leaving labor open to a transformative process that nobody can really predict or control. It’s likely that a constitutional convention will be an extreme waste of political energy, which no one can afford in the months leading up to the first chance to remove Donald Trump from office.