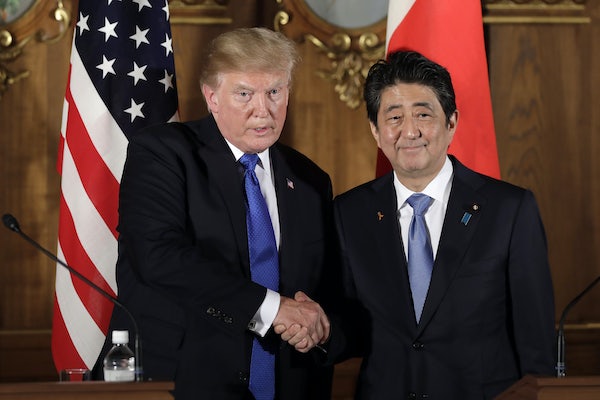 Donald Trump’s foreign trip was so close to being a success.

Like many beleaguered and unpopular presidents before him, Trump has come to like foreign trips and the pomp, flattery, and distraction they bring. And, despite a lot of noise, there were heartening signs that Trump had learned from past mistakes, particularly when it came to North Korea. In a speech in Seoul on Tuesday, the president appeared to show an evolution in his approach to the Hermit Kingdom: He made a strong case against the country’s human rights abuses and didn’t call Kim Jong-un any names. (This last point is further evidence that Trump is always graded on a curve.)

And then, as is customary, he ruined it all by flying off the handle in the trip’s final days. In his Seoul speech, for the first time in his presidency, Trump dramatically lowered the bar for nuclear negotiations. But then, days later, he squandered that opportunity by once again insulting Kim.

The North Korean regime is remarkably sensitive to personal insults like this. Trump’s response, part of his “always punch back” strategy, most likely undid whatever progress he may have made.

A day later, Trump messed up yet again. While his trip to Asia offered an escape from the Russia investigation that has dogged his administration, Trump appeared to take Vladimir Putin’s side on the issue of Russian interference in the 2016 election. “I believe that he feels that he and Russia did not meddle in the election,” Trump said. “As to whether I believe it, I’m with our agencies. As currently led by fine people, I believe very much in our intelligence agencies.” This is a very strange thing to say! Interference of the sort Russia engaged in during the 2016 election is always categorically denied—why Trump feels the need to defend Putin’s sincerity, which is clearly feigned, is a mystery.

But it’s also just foolish. Trump spent the last week figuratively and literally running away from the Russia investigation. Defending Putin only ensured that the scandal accompanied him on his trip.