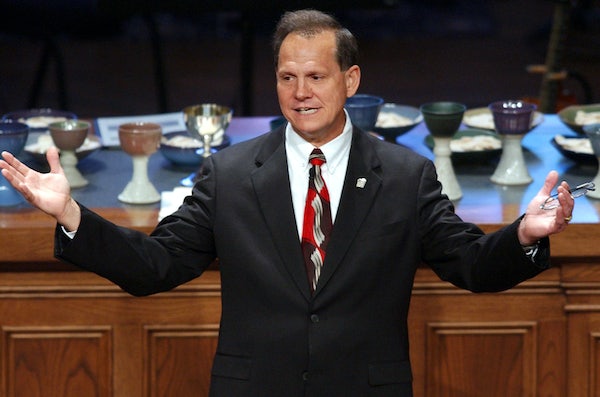 Republicans are now saying they they will expel Roy Moore from the Senate.

At a press conference in New York on Monday, Beverly Young Nelson told reporters that the Alabama senatorial candidate tried to force her to have sex with him when she was 15 or 16 years old. The incident happened roughly 40 years ago when Moore was district attorney, the same period described by earlier accusers. With the accusations mounting, Senate Republicans say they will kick him out of the Senate, should he be elected in a special election in December.

At the time, Nelson was working as a waitress in Gadsden, Alabama, where Moore was a fixture. According to Nelson, Moore repeatedly complimented Nelson on her appearance but she rebuffed his advances. One day after work, Nelson needed a ride because her boyfriend hadn’t shown up. Moore offered her a ride. In the car, he groped Nelson, touching her breast. “He forced my head onto his crotch,” Nelson added. “I continued to struggle. I was determined that I was not going to allow him to force me to have sex with him. I was terrified. He was also trying to pull my shirt off. I thought he was going to rape me.”

Nelson fended off the attack, which allegedly ended with her being kicked out of the car and told, “You’re just a child and I am the district attorney ... if you tell anyone about this, no one will ever believe you.”

Nelson has evidence that Moore knew her at the time (he wrote a florid note in her high school yearbook), and she has family and friends who will verify that she told them about the attack years ago. She is also willing to testify under oath. As with the women who spoke with The Washington Post for its explosive report last week, Nelson is a credible witness.