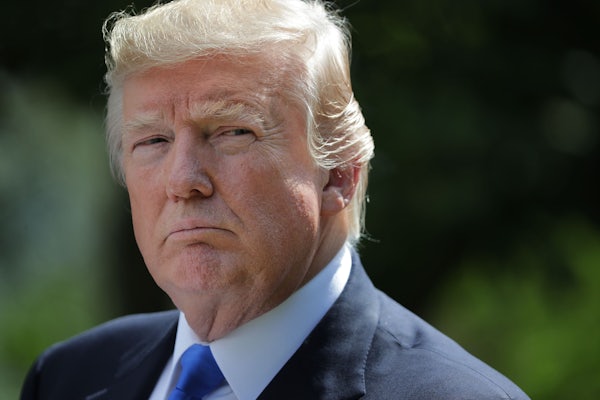 Trump has always clung to a kind of plausible deniability when peddling racist nonsense, insisting that his attacks on NFL players protesting police brutality are about patriotism and that his claims that undocumented immigrants are rapists are about law and order. But there is nothing Trump can do to defend his decision to retweet three videos posted by Jayda Fransen, the leader of the extremist far-right group Britain First, on Wednesday. The videos are captioned “Muslim Destroys a Statue of Virgin Mary!”, “Islamist mob pushes teenage boy off roof and beats him to death!”, and “Muslim migrant beats up Dutch boy on crutches!”

These videos are racist and clear incitements to violence. They portray Muslims as inherently violent and locked in an existential conflict with Christians and white people. The reason they’ve even alarmed conspiracy theorists like InfoWars’s Paul Joseph Watson is that they dispense with any subtext and get straight to the Islamophobic text. Trump is not merely saying that we should stop bad Muslims who are perverting Islam, but that Islam itself represents a threat to the West, to white people, and to Christianity.

This strain of Islamophobia was at the center of Trump’s presidential campaign and his administration’s succession of blocked executive orders banning travel from a number of Muslim-majority countries. But the videos Trump retweeted on Wednesday nevertheless represent a new evolution in his embrace of conspiracy theory–fueled xenophobia. A day after it was reported that Trump is still pushing the lie that Barack Obama was not born in America, and the same morning that Trump suggested that Joe Scarborough murdered an intern, Trump is pushing unverified videos from a racist political party. And that’s terrifying, even for Trump.