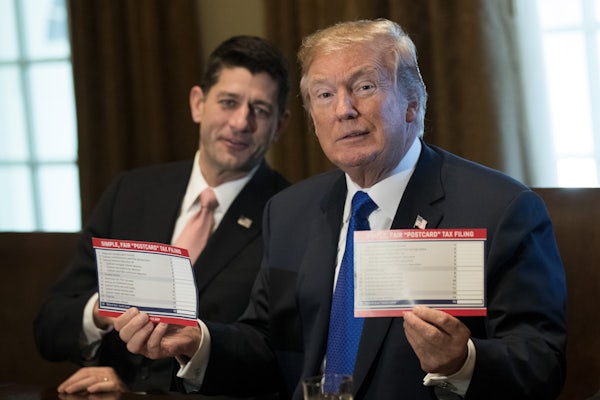 The GOP Congress is rushing to finalize its legislation for a massive corporate tax cut, a bill that would also hike taxes on some and inflict disproportionate harm on Democratic constituencies. The GOP looks likely to get this done by Christmas, delivering Donald Trump his first legislative victory nearly a year into his presidency. But heading into a midterm election year, Republicans have failed to sell this legislative monstrosity to the American people.

“Over half disapprove of it—including four in 10 who disapprove strongly, and only one in five Americans expect their own taxes to go down,” according to a new CBS News poll. “Though the plan finds support from Republicans who believe it will help the economy overall, only one-third of Republicans expect their own taxes to go down. Large majorities of all political stripes believe the plan will help corporations and the wealthy, but only one in three believe it will help the middle class.” On Wednesday, The New York Times reported that conservative groups are even failing to sell the tax legislation to likeminded voters:

Not only do a majority of Americans doubt it is good policy, but people in conservative areas of the country have low expectations that it would do anything to help them, new polling has found.

In counties where Mr. Trump performed exceptionally well — that he won but Mr. Obama carried in 2012, or where he ran 20 percent ahead of what Mitt Romney received in 2012 — only 17 percent said they expect to pay less in taxes, according to a recent NBC News/Wall Street Journal poll. Another 25 percent said they expected their family would actually pay higher taxes.

To be sure, most Republicans support the tax bill. The CBS poll showed 70 percent of them believe it will help the economy, and “more than three in four Republicans say the plan is fair to people like them, a sentiment that cuts across income levels, suggesting that their views are driven more by the prospects for the wider economy.” If Trump claims tax reform as a success on the campaign trail next year, partisanship will work its magic and his supporters will believe him—even those who will be hurt by the bill. Yet its broad unpopularity, especially as it pertains to the middle class, suggests Democrats might easily enough convince swing voters of the scam that it is.