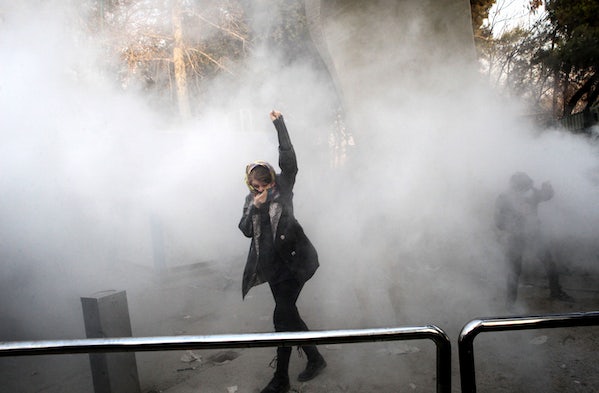 Twenty people are reportedly dead after nearly a week of anti-regime protests in Iran. According to The Washington Post, the protests are the largest since the country’s ill-fated Green Movement in 2009. The Iranian government blames “enemies of Iran” for stoking unrest, but the reality is less favorable to the regime: The protests have reportedly spread to traditionally conservative regions, and crackdown threats haven’t emptied Iranian streets.

Israel’s hard-right government praised the protesters, and so has the American right. In some cases, they’ve pivoted to feminist sentiment. “The most striking images coming out of the Iran human rights protests are not of men—they are of women,” Fox News columnist Stephen Miller asserted. “So the question must be asked: Where are the women’s movement supporters in the United States and Europe, which gathered en masse to protest a newly inaugurated American president last year?”

Meanwhile, the Trump administration used the protests to threaten further sanctions on Iran—which would come at the expense of the same protesters it ostensibly supports. The president himself has repeatedly tweeted his support for the protesters, but there is widespread suspicion of Trump in Iran due to his attempt to ban Iranians from entering the United States. Lindsey Graham, one of the GOP’s hawks in the Senate, said on Sunday that the protests were evidence that the Iranian nuclear deal, which promised sanctions relief, had failed.

Many argue that such vocal support is counter-productive, since the regime can use it as evidence that the protests are indeed fomented by outsiders. “I, too, want to see the government in Tehran weakened, moderated or even removed,” Philip Gordon wrote in The New York Times. “So let me offer Mr. Trump some unsolicited advice: Keep quiet and do nothing.” Protesters themselves haven’t requested these public statements, which is in keeping with trends in public opinion; a 2016 survey by the University of Maryland’s Center for International and Security Studies found that most Iranians considered the U.S. to be “actively obstructive” in Iranian affairs.