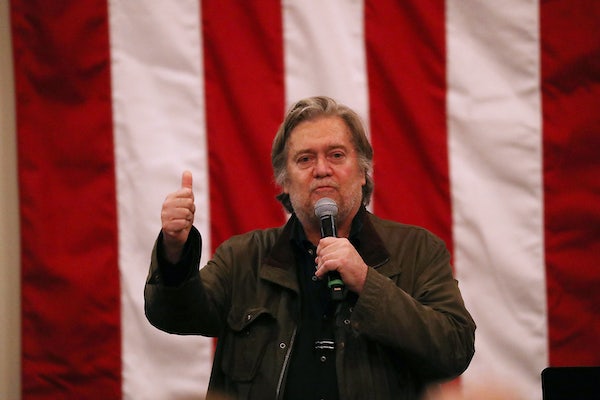 The former Trump adviser has hired a lawyer and is scheduled to answer questions before the House Intelligence Committee behind closed doors on Tuesday. Committee members had asked Bannon last month to voluntarily testify as part of their ongoing probe into Russian meddling during the 2016 presidential election. Some liberal pundits are grabbing the popcorn:

What will Bannon be able to tell investigators, though? The right-wing media executive worked in the White House during Trump’s dismissal of FBI Director James Comey last May, making him a potential witness in an obstruction-of-justice case against the president. But Bannon didn’t join the Trump campaign until August 2016, well after some of the most scrutinized discussions and meetings about Russia. That includes the infamous Trump Tower meeting in July 2016 between Donald Trump, Jr., Trump son-in-law Jared Kushner, campaign manager Paul Manafort, and a Russian lawyer who purportedly offered damaging information about Hillary Clinton.

In interviews made public last week in excerpts from reporter Michael Wolff’s book Fire and Fury, Bannon described that meeting as “treasonous” and “unpatriotic.” He also suggested the president’s eldest son would “crack like an egg” under questioning about those events. Trump responded by publicly excommunicating “Sloppy Steve,” and Bannon was forced to step down as CEO of Breitbart News at the behest of right-wing patron Rebekah Mercer. Nonetheless, Bannon has continued to declare his “unwavering” support for Trump’s “efforts to make America great again.”