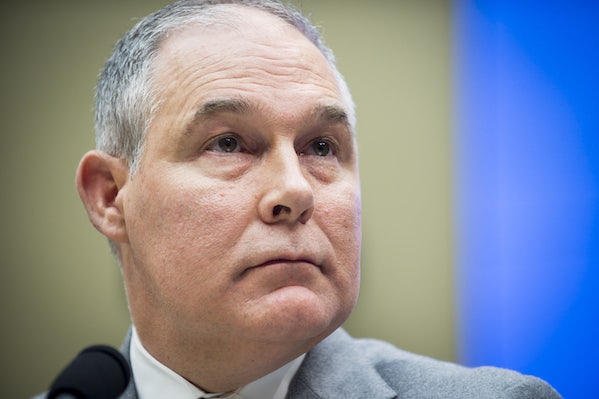 Week two of Pruitt’s scandalpalooza is off to a blazing start.

Last week, Environmental Protection Agency Administrator Scott Pruitt endured what The Daily Beast deemed “a tougher week than any Cabinet official yet.” It’s already clear that this week won’t be any easier. On Monday, The New York Times reported that the federal government’s top ethics official is getting involved in Pruitt’s hodgepodge of corruption and waste scandals. David J. Apol, the acting director of the Office of Government Ethics, reportedly sent a letter to the EPA demanding the agency take “appropriate actions” to address questions of impropriety. “The success of our government depends on maintaining the trust of the people we serve,” Apol wrote.

The weekend didn’t provide much relief for Pruitt, either. On Sunday, CNN reported on the unprecedented nature of Pruitt’s security detail. His team “consists of 19 agents and includes a fleet of at least 19 vehicles,” which “leaves the dollar amount for his round-the-clock security in the millions,” according to the report. The EPA said that Pruitt has unusual security needs because of “unprecedented” death threats. But in response to a public records request for death threats against Pruitt, the EPA asserted that no records exist.

Lawmakers and pundits across the political spectrum also criticized the EPA chief over the weekend for his sketchy condo rental with a lobbyist couple; his lavish spending on travel and security; and his reported retaliation against EPA staffers who questioned that spending. “I don’t mean to denigrate Mr. Pruitt but doggone it, he represents the president of the United States and it is hurting his boss and it needs to stop,” Republican Senator John Kennedy said on CBS’ Face the Nation on Sunday. Kennedy also told Pruitt to “stop acting like a chucklehead.”

Pruitt’s job still does not appear to be in jeopardy. On Monday, Republican Senator John Barrasso—the chairman of the Senate panel that oversees the EPA—expressed his support for Pruitt. And the EPA chief still had the public support of the president as of Saturday.

In defending Pruitt, both Barrasso and Trump cited his success at the EPA; Trump said he was doing a “great job,” and Barrasso said Pruitt has “accomplished key priorities.” But as I pointed out on Friday—and as the New York Times, Politico, and NPR have pointed out since—Pruitt hasn’t actually accomplished much when it comes to rolling back EPA regulations.