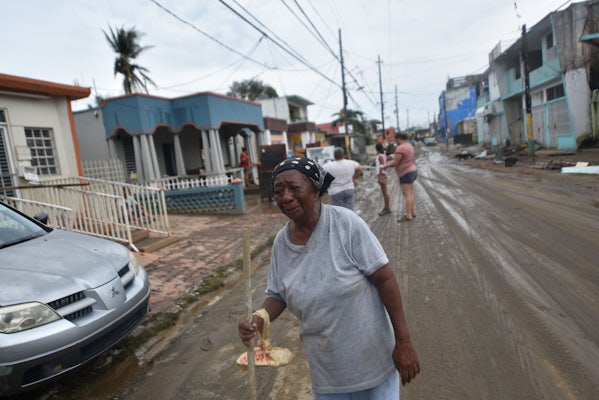 The death toll from last year’s devastating hurricane in Puerto Rico is nearly 73 times greater than the government’s official estimate of 64 deaths, according to a new study from the Harvard T.H. Chan School of Public Health. First reported by The Washington Post on Tuesday, its findings are a damning indictment of the Trump administration’s response to the storm.

Most of the deaths occurred in the days, weeks, and months after Maria, often due to a lack of medical services. The Post describes the case of Ivette Leon, a 54-year-old mother who couldn’t get cell phone reception to dial 911. Her daughter “cradled her mother’s head as she lay dying on the floor of her bedroom ... gasping for air and pleading for help.” Leon died on November 29, more than a month after Maria hit the island. The study says that thousands more died this way: waiting for help that never arrived.

In some cases, help from the U.S. government was slow to arrive because of the limits of Puerto Rico’s infrastructure. But help was also slow to arrive because of the government’s denial about how much help was needed. When President Donald Trump visited Puerto Rico in October, he said things could have been much worse. “Every death is a horror,” he said, “but if you look at a real catastrophe like Katrina and you look at the tremendous—hundreds and hundreds of people that died—and you look at what happened here... You can be very proud. Everybody watching can really be very proud of what’s taken place in Puerto Rico.”

Now, eight months after the storm, 13,000 Puerto Ricans still lack electricity, 283 schools are slated to close because thousands of people have fled the island, and another hurricane season is less than a week away.