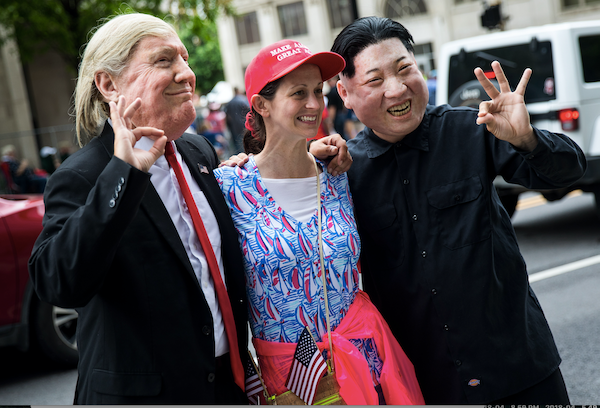 Summit with North Korea will be about relationship building rather than nukes.

President Donald Trump announced Friday afternoon that he’ll be meeting with North Korean leader Kim Jong Un in Singapore on June 12. As with his earlier letter he sent to Kim after cancelling a summit, Trump framed the meeting in the language of personal connections. “It’s going to have to be a process, but relationships are building, and that’s a very good thing,” the president told assembled journalists. About the animosity that led to the cancellation, Trump said, “We’re over that. Totally over that.” He also praised a letter that he had received from Kim a “very nice letter.” Then, strangely, Trump acknowledged he hadn’t read Kim’s letter:

Leaving the letter aside, Trump’s approach to North Korea suggests that he wants to form a bond before taking up tough issues. Trump indicated that he did not talk about human rights with Kim Yong Chol, the vice-chairman of North Korea’s Central Committee who brought the letter to the White House. Trump seemed eager to dampen down any expectations that the nuclear stand-off would be seriously addressed at the meeting.

Trump isn’t completely wrong in his instincts. Diplomacy is about relationship building and any long term settlement will require trust-building exercises. But diplomacy also rests on knowledge and there is little reason to think that Trump or his administration can get up to speed on actual policy in time for the summit. Indeed, Matthew  Pottinger, the top official for Asia in the National Security Council, made news earlier this week by telling reporters in a backgrounder that it would be “impossible” for Trump to be prepared for a summit by June 12.