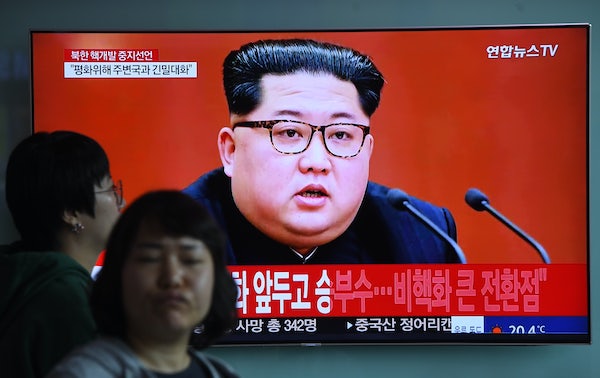 Democrats need to give peace a chance in North Korea.

Senate Democrats have emerged as some of the most severe critics of President Donald Trump’s North Korean diplomacy. Earlier this week, seven Democratic senators led by Chuck Schumer wrote a letter to the president warning, “Any deal that explicitly or implicitly gives North Korea sanctions relief for anything other than the verifiable performance of its obligations to dismantle its nuclear and missile arsenal is a bad deal.”

In a sharp column, New York Times pundit Nicholas Kristof rightly calls out this hawkish rhetoric, pointing out that Democrats are acting as spoilers since the conditions they are setting are ones North Korea would never meet. “It’s almost unimaginable that North Korea will allow such intrusive inspections—any country would resist having an enemy poke around its military bases, underground bomb shelters and border fortifications,” Kristof notes. “So these Democrats are essentially saying that no plausible deal will pass muster.”

In their knee-jerk opposition to even an attempt at negotiation, these Senate Democrats are aligning themselves with the most belligerent elements of the Trump administration, notably national security advisor John Bolton. These Democrats are mimicking the same partisan irresponsibility that leads Republicans to thwart diplomatic initiatives in Democratic administrations.

Kristof is realistic enough to recognize that Trump is unlikely to make a lasting agreement leading to denuclearization. But, as the columnist plausibly notes, simply holding talks could lead to more modest but still valuable achievements like an extended moratorium on testing. “North Korea might well cheat, and these are half-steps, not rapid denuclearization,” he writes. “But half-steps toward peace are better than full strides toward war.”