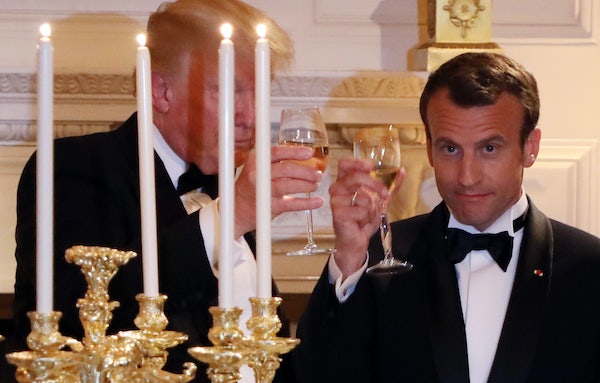 The president is gearing up for two major foreign policy trips, first to Canada to meet his Group of Seven allies and then to Singapore to talk nuclear weapons with North Korean despot Kim Jong Un. While the G7 nations are longtime American friends and Kim is head of a rogue nation, Trump is much more optimistic about meeting America’s foe than its friends. As The Washington Post reports, “the president said Tuesday to several advisers that he fears attending the Group of Seven summit in rural Charlevoix, Quebec, may not be a good use of his time because he is diametrically opposed on many key issues with his counterparts—and does not want to be lectured by them.”

Trump is right to be wary of the G7 summit since there is every indication that America’s allies are increasingly frustrated with his policies on a host of issues ranging from tariffs to pulling out of the Paris climate accord and the Iran nuclear deal. Quebec City now looms as the place where Trump will get concerted pushback, even from leaders who have tried to flatter Trump’s ego such as President Emmanuel Macron.

“France has joined Germany in warning President Donald Trump that it won’t sign a joint statement of the Group of 7 at the summit in Quebec this week without major concessions from the U.S., a French official in the president’s office said,” Bloomberg reports. “President Emmanuel Macron has signaled that progress on tariffs, Iran nuclear agreement and Paris climate accord must be made before he’ll be willing to sign a joint statement, the official told reporters Wednesday in Ottawa.”

Macron’s shift to a hardline stance against Trump is further evidence that courting Trump through praise and professions of friendship doesn’t work for leaders of democratic countries, because they are limited by the rule of law in terms of what deal-enhancing rewards they can offer. “Foreign leaders are learning that hand-holding, golf games, military parades and other efforts to personally woo President Donald Trump do not guarantee that Trump won’t burn them on key policy issues,” Politico observes.