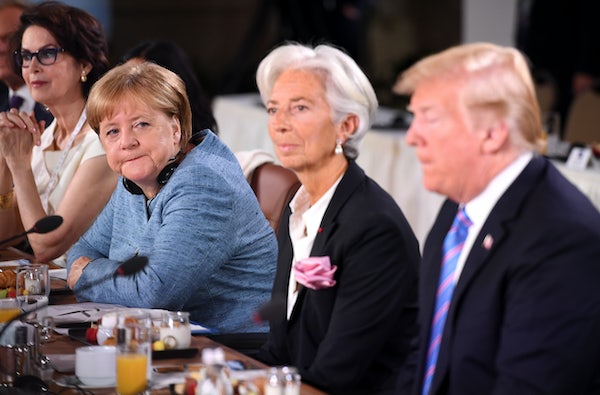 In a series of tweets on Monday morning, he attacked the German chancellor’s refugee policy for “allowing millions of people in who have so strongly and violently changed their culture.” He also claimed that crime was “way up” as a result, even though it actually hit a 30-year low in March. Merkel’s open-door policy on immigration, particularly for refugees, stands in complete juxtaposition to Trump’s hardline approach, which has led to the separation of thousands of children from their parents at the border. Trump has a history of targeting Merkel on the issue, which has led to political convulsions not only in Germany, but across Europe.

In 2015, Trump claimed Merkel was the “person who is ruining Germany”:

The following February, he told the French conservative magazine Valeurs Actuelles that he thought “Angela Merkel made a tragic mistake with the migrants.” Warning that if she didn’t fix the situation “completely and firmly” it would be “the end of Europe.” In a 2017 interview with U.K. MP Michael Gove for the German newspaper Bild and London’s The Times, he added, “I think she made one very catastrophic mistake, and that was taking all of these illegals.”

Merkel and her Interior Minister Horst Seehofer recently agreed to a two-week truce in an immigration standoff that has threatened her government. During this time, Merkel will try to reach a migration deal with the European Union, amidst increased opposition animated by two recent controversies: allegations that civil servants granted asylum to migrants for money and the brutal murder of a 14-year-old girl in western Germany by an Iraqi asylum-seeker.

The number of asylum-seekers entering Germany has drastically declined from the 890,000 people that arrived at the peak of the migrant crisis in 2015, but 10,000 still arrive every month.