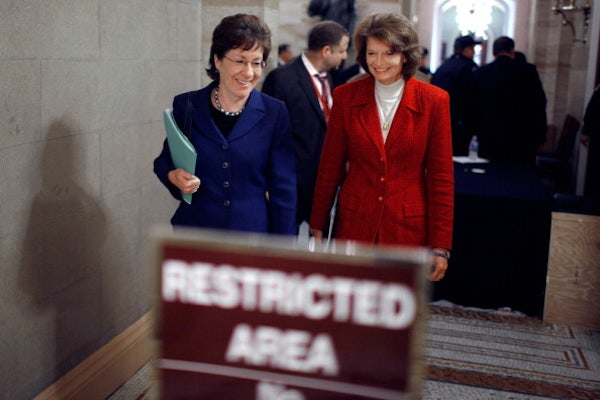 Will Susan Collins and Lisa Murkowski save Roe v. Wade? Don’t count on it.

Partly due to their pro-choice leanings, the two Republican senators are being labeled potential spoilers amidst a GOP Senate caucus that is otherwise looking to quickly confirm a Supreme Court justice from President Trump’s list of 25 potentials.

In response to Wednesday’s news that Justice Anthony Kennedy will retire in July, there is concern about the potential repeal of Roe v. Wade. The 1973 decision legalizing abortion nationwide is bound to come under judicial assault from an emboldened right, given that Kennedy was the lone conservative on the court who consistently showed a willingness to respect Court precedent on the issue.

Jeffrey Toobin was blunt in his assessment of what Kennedy’s retirement means for American abortion law:

The repeal of Roe would render abortion instantly illegal in 33 states. This grim prospect has left progressives hoping that the Republican-controlled Senate will oppose an anti-abortion nominee. This hope hinges on Collins and Murkowski:

But how likely are they to actually vote against a Republican Supreme Court nominee? Not very.

Though the two women have voted across party lines before, and Collins has even called Roe “settled law,” there’s a difference between voting to confirm a Supreme Court justice and voting on the fate of abortion law itself—a vote that senators don’t have. Collins and Murkowski, after all, both voted to confirm arch-conservative Neil Gorsuch to the Court.