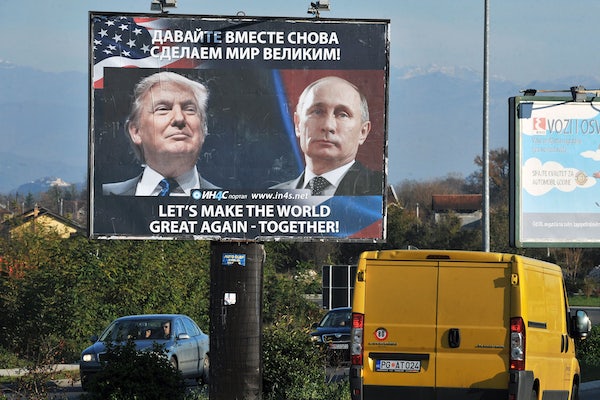 The Russia scandal casts a shadow on Trump’s European trip.

As the president gears up for travels to Brussels and London to meet with European allies, he continues to be dogged by questions about possible collusions with Russia in the 2016 election, an ongoing controversy that will inevitably heighten tensions in meetings. New York magazine has just published an in-depth article by Jonathan Chait laying out the known facts of the case and exploring various scenarios, including the possibility that the president is a Russian asset.

But even leaving that unlikely theory aside, it remains true that Trump continues to praise Russian President Vladimir Putin. “They’re going, ‘Will President Trump be prepared? You know, President Putin is KGB,’ and this and that,” Trump said at a rally last Friday. “You know what? Putin’s fine. He’s fine.”

On Sunday, British woman Dawn Sturgess died after exposure to the nerve agent Novichok. Previously the British government accused the Russian government of being behind a Novichok attack. The latest Novichok incident comes while British Prime Minister Theresa May is struggling to deal with a cabinet crisis on how to handle Brexit, which has seen senior ministers resign.

On Monday, Trump continued to lambast NATO allies on Twitter:

Taken together, all these facts foretell a jittery European excursion.