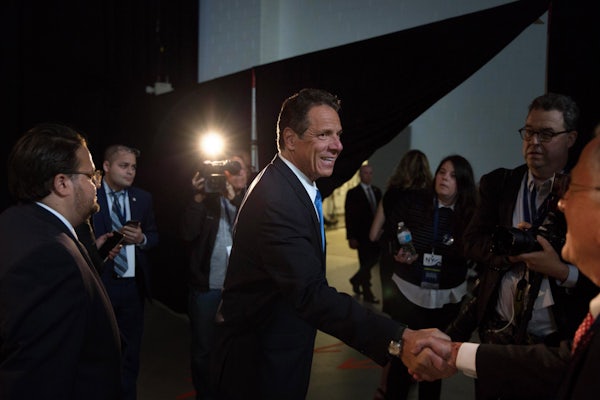 Is Andrew Cuomo insecure about his small donations?

The New York governor has seen no shortage of major contributions to his primary campaign against Cynthia Nixon. Campaign finance reports released on Monday night have the two-term governor leading with $31.1 million in his war chest compared to Nixon’s $660,000. Despite this lead, it has become a sore point for Cuomo that Nixon’s campaign vastly outpaces him on donations of under $250.

In what may be an attempt to compete with Nixon’s more grassroots campaign, the New York City roommate of Cuomo’s creative director Julia Yang appears to have donated 69 times to Cuomo’s campaign in increments of $1, $3, and $5 donations in the final days leading up to campaign finance reporting deadline, according to New York Times reporter Shane Goldmacher. Politico reports that governor has also been offering raffle tickets for a Billy Joel concert in exchange for campaign donations of $5.

Even still, donations of $250 or less make up just over 1 percent of Cuomo’s total contributions, but 47 percent of Nixon’s. She received more small donations in the first 24 hours after launching her campaign than Cuomo had in years.

Campaign finance reports also indicate that Cuomo has received more than $120,000 from internet entrepreneurs Cameron and Tyler Winklevoss (also known as the Winklevoss twins), and has spent $1.7 million on TV ads this campaign season. A recent Intercept investigation revealed that since 2011 Cuomo has received campaign donations from landlords who collect millions of dollars in rent from Immigration and Customs enforcement (ICE).