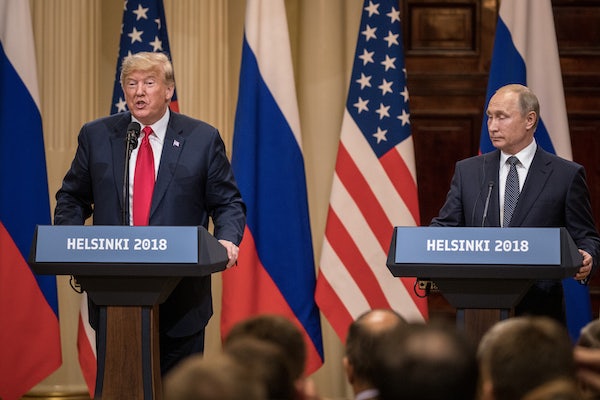 Donald Trump has been described as “the homebody president” who “rarely goes out — and when he does it’s almost always to properties that bear his name.” So it’s a measure of Trump’s commitment to forging better ties with Russia that the White House indicated on Friday that he is “open to visiting Moscow.”

The proposed Moscow trip is an outgrowth of tangled negotiations. After the much-criticized Helsinki meeting, Trump invited Russian President Vladimir Putin to visit the White House in the fall. National Security Advisor John Bolton worked to delay this meeting, saying on Wednesday that “The President believes that the next bilateral meeting with President Putin should take place after the Russia witch hunt is over, so we’ve agreed that it will be after the first of the year.” Putin made a counter-offer of asking Trump to come to Moscow, something the President seems eager to do.

Trump’s continued outreach to Putin comes in the teeth of opposition not just from Democrats but also congressional Republicans and even figures in his own administration. As Axios notes, “The relationship between the two leaders has stunned many in Washington, and their Helsinki summit has drawn criticism from people across the political spectrum—even those typically supportive of the president. But Trump continues to insist that positive relations with Russia is a good thing, and additional talks between them is his way of proving it.”